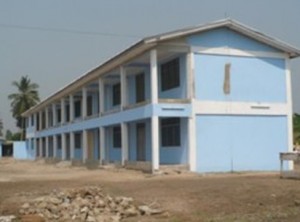 Professor Kwesi Yankah, Minister of State in charge of Tertiary Education, has cut sod for construction works to begin on a six unit classroom and kindergarten blocks at Agona Bawjiase and Agona Kokwaado in the Agona East District.

The two projects are being financed by the Ghana Education Trust Fund (GETFUND).

The contractors who have all moved to site, would use six months to complete the projects.

Prof Yankah said government is poised to invest heavily to improve educational structures and tasked the people of Agona East, to educate their wards on the need to stem illiteracy which breeds poverty.

The Minister of State used the occasion to appeal to NPP delegates in the area, to give him the nod to lead the party as their parliamentary candidate in the coming elections.

Prof Yankah said since his appointment as Minister of State, more than 20 educational projects have been built in the Agona East District, Agona West and other adjoining districts as part of efforts to facilitate quality education in the area.

He urged the contractors to recruit carpenters, masons, steel benders and laborers from the communities to reduce unemployment problems.

The Minister asked the chiefs and people in the district to support government to sustain the free Senior High School (SHS) initiative, which was introduced to lessen the burden on parents.

Prof Yankah promised that, about 20 communities in Agona East District would be connected to the national grid to boost local business activities.

Nana Yaw Eduah, Supihene of Agona Bawjiase, thanked government for the project and made an appeal through Prof Yankah, to ensure that Agona Bawjiase D.A. Basic School, is placed on the school feeding programme.

He urged parents to invest in their children’s education.