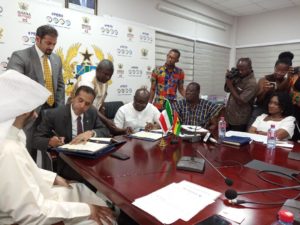 Ghana and the Kuwait Fund for Arab Economic Development have signed a seven million Kuwaiti Dinars (an equivalent of about $23.8 million) loan agreement to finance the rehabilitation of Dome-Kitase Road Project.

Mr Ken Ofori-Atta, the Minister of Finance initialed for Ghana, while Mr Nedhal Alolayan, Deputy Director-General of the Kuwait Fund for Arab Economic Development signed for the Fund.

The financing terms for the loan facility are an interest rate of 1.5 per cent (including 0.5 per cent administration charges), maturity period of 28 years (including four years grace period) and two payments (equal principal payments) per annum.

The project has a grant element of 36.53 per cent, and its implementation period is estimated to be three years and is expected to be completed by the end of 2022.

Mr Ofori-Atta on behalf of the Government expressed gratitude to the State of Kuwait and the Kuwait Fund for Arab Development for their unflinching commitment and support to Ghana’s development agenda, especially for the provision of the support of $24.8 million for the rehabilitation of the Dome-Kitase Road Project.

“Today is an important day for the people of Ghana, especially those in Dome, Kwabenya, Ayim, Brekusu, Agyamenti and Kitase environs. More especially, a great milestone in strengthening the longstanding healthy bilateral relationship between the Government of Ghana and the State of Kuwait,” he said.

He said the rehabilitation of the Dome-Kitase road would provide a vital linkage between Greater Accra and Eastern Region.

“It will specially boost economic activities, movement of mainly agriculture produce and produce and people to markets, and facilitate trade,” Mr Ofori-Atta.

“It will also reduce travel time and congestion on the Accra-Aburi Road; vehicle operation costs and increase in accessibility, convenience as well as safety of commuters.”

He recounted that over the years, the State of Kuwait through the Kuwait Fund for Arab Development has supported Ghana with concessional facilities in various projects and Technical assistance including; the Korle Lagoon Ecological Restoration Project (Phase I and II); Aboadze-Volta Transmission Line Project; Accra Plains Irrigation Project feasibility study; Maternity and Children’s Hospital feasibility study, which had all been completed and the expansion and development projects of 26 existing senior high schools.

On his part, Mr Alolayan said the Kuwait Fund efforts in the development of Ghana went back to 1977, when the fund participated in the financing of the Kpong Hydro-Electric Project with a loan equivalent to about GH¢167,000,000.

He said since 1977, till date the Kuwait Fund extended 11 concessionary loans to Ghana, amounting to about GH¢1 billion to participate in the financing of development projects in various sectors of the economy such as; hydroelectric power, ecological, health, education and transport sectors, in addition, to three technical assistance with a total amount of GH¢11.5 million.

“We cherish our cooperation with Ghana and assure you of our continued support to serve our common objective of development and to strengthen the friendly relations between our two countries.”

Mr Kwasi Amoako-Atta, the Minister of Roads and Highways, said his Ministry identified the 19.1km Dome-Kitase road, inclusive of the one kilometre Ashesi University internal roads as one of its key priority projects.

He said both Cabinet and Parliament gave their approval for the project and therefore, there should be no fear of the fund management activities.