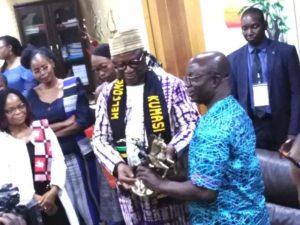 Metropolitan authorities of Kumasi and Ouagadogou, two key commercial cities in Ghana and Burkina Faso, respectively, have renewed bi-lateral ties to increase the volume of trade and propel development.

Since Ghana’s pre-colonial era, the Kumasi Central Market, the largest open space market in the West-African sub-Region, had served as a hub for many products from the land-locked country.

They include vegetables, meat, fruits and cereals.

Mr Osei Assibey-Antwi, the Metropolitan Chief Executive (MCE) of Kumasi, in an interview with the Ghana News Agency, said:

“The Kumasi Metropolitan Assembly (KMA) is open for business and development activities critical to advancing the cause of the people in the spirit of free trade.”

This was after a 23-member delegation, led by Mr Roland Pierre Beouinde, the MCE of Ouagadogou, paid a courtesy call on him.

The delegation was on a three-day visit to Kumasi to share development experiences, explore business opportunities and discuss immigration and other security issues.

Mr Assibey-Antwi indicated that agriculture was one sector the two countries ought to deepen partnership since they had the potential to make the most out of it.

Additionally, they should take advantage of the prevailing healthy relationships to exchange more ideas on tourism development.

The Kumasi MCE gave the assurance that the Metropolitan Security Council would not relent in protecting Burkinabe nationals doing business in the city to further boost socio-economic growth.

Mr Beouinde, on behalf of the delegation, thanked his Ghanaian counterpart for granting them audience, saying the two cities had a lot in common, which could serve their varied interests.