Obrimpong Sintim Poku calls for protection of the ‘Big Tree’

September 3, 2019 Tourism Comments Off on Obrimpong Sintim Poku calls for protection of the ‘Big Tree’ 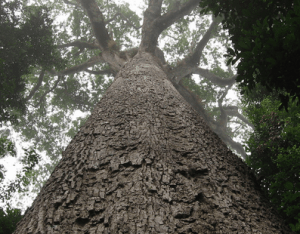 Obrimpong Sintim Poku, Mansohene and the Benkumhene of Akyem Kotoku Traditional Area has called for collective efforts to protect the ‘Big Tree’, which is said to be the biggest tree in West Africa.

Obrimpong Poku was speaking at a durbar at Mofram, near Akim Oda, in the Eastern Region, after the launching of a tree planting exercise, organized by Alliance for Green Revolution in Africa (AGRA), in collaboration with the Forestry Commission.

The tree planting exercise forms part of activities by AGRA to observe the 10th anniversary of the Green Revolution Forum, which is being organized in Accra.

The Green Revolution Forum is an annual gathering of all the major players in the agriculture value chain players, organized by the AGRA, to strategize on the promotion of sustainable food security in Africa.

The project aims at planting 20,000 seedlings in depleted areas of the forest reserve to be nurtured by 300 personnel of the Youth in Afforestation.

Obrimpong Poku regretted that many people are aware of the activities of the chainsaw operators in the forest reserve and are looking on.

The District Chief Executive for Asene-Akroso-Manso, Mr Alex Inkoom said the Free Senior Secondary education policy of the government depends on a sustainable food security in the country.

He said if the country cannot produce enough to feed the students,  the government  would be forced to import food to feed the large number of students in school, which could affect the foreign exchange of the country, hence the Planting for Food and Jobs policy.

Mr Isaac Adonteng, Eastern Regional Manager of the Forestry Commission explained that the Asinapim Forest Reserve was chosen for the tree planting exercise because of the destruction of portions of the forest cover.

He said AGRA was supporting the development of high yielding seeds to help increase the productivity of farmers and increase the incomes of the rural dwellers.

He explained that, as part of the organization of the Green Revolution Forum in Ghana for the second time, AGRA was collaborating with the Forestry Commission to plant trees to help protect the environment and ensure food security.

Dr Victor Antwi of AGRA, urged farmers in the area to go for the seedlings at the Forestry Commission and involve their children in the tree planting exercise, whilst educating them on the need to protect the environment and ensure food security.