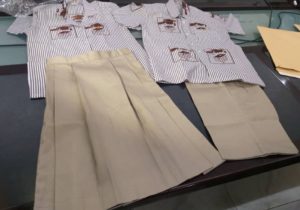 Local textile manufacturing companies have bemoaned the failure of the Ghana Education Service (GES) and its stakeholders to contract them to produce the new uniforms for Junior High Schools(JHS).

The GES in April announced that from September, 2019, it will introduce new uniforms for JHS pupils for them to appreciate the fact that they are in transition from basic school to secondary.

The said uniform was made up of a brown and white striped shirt with the Ghana flag, a graduation cap, a certificate and books superimposed on it which would be worn over a khaki skirt and shorts for girls and boys respectively.

At a press conference on Monday, the Coalition of Textile Workers revealed that none of the materials of the new uniform on the market were manufactured by the four local textile companies.

Mr John Ackon, Chairman of the Coalition, said it was sad that the GES was promoting the sale of textiles printed in China for parents to buy from the market even though it was part of measures that all government agencies and schools must procure their uniforms from local producers.

Mr Ackon said “none of us has been contacted by GES on it, when you look at the material on the market it is clear that it came from China”.

He questioned which company the GES expected to print the uniforms to the market for parents to buy as they directed when they had not contracted any of the textile companies in Ghana even after several lobbying.

“It’s a pity that we live in a country that promote such things, and allowing such uniforms to be printed from China while we have textile companies here, ” he stressed.

The Coalition called on government to implement some seven major measures agreed upon by stakeholders in 2018 to ensure a level playing ground for the local industries while checking counterfeiting, smuggling and pirating of their designs.

They said key among the measures was the introduction of tax stamp to ensure that government got the needed revenue from the importation of textile products into the country as well as to check piracy and smuggling of local textile designs.

Textiles companies give government one week ultimatum to implement measures