Tree planting: a remedy for perennial flooding in Ghana

July 31, 2019 Feature Articles Comments Off on Tree planting: a remedy for perennial flooding in Ghana 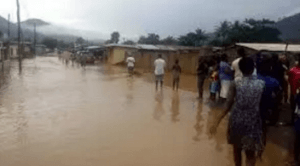 Accra, Ghana’s seat of government is grappled with perennial flooding during heavy down pours. Floods have become a usual phenomenon.

In June 2015, Accra floods resulted in at least 25 deaths directly from the flooding, while a petrol station explosion, partly caused by the flooding, killed at least 200 more people. Two years down the line, heavy rains left parts of Accra inaccessible again, resulting in heavy traffic on the roads in the city and also a halt in commercial activities as markets were flooded and workers trapped.

Recently in Takoradi, heavy rains witnessed last month within the Metropolis destroyed property and also claimed the lives of five children in Ngyeresia, a fishing community in the Metropolis.

The home, accommodating six children could no longer stand the wrath of the more than five hours torrential and non-stop rains and therefore caved in on the children, killing five of them instantly and leaving one in a critical condition. The situation was not different as people’s houses were partially submerged by the rain water, while most bridges and culverts in the communities were submerged.

Causes of flood is as a result of the improper planning of settlement, choked gutters which block the drainage system, lack of planted trees and a few other human factors. To stem the perennial flooding in parts of the districts during the rainy season, storm drains and other drains in flood prone areas are dredged and desilted.

However, these measures have not provided a lasting solution as the phenomenon keeps repeating itself year after year.

Meanwhile, tree planting has been deemed the best solution to this menace. This is because, trees reduce the amount of storm water runoff, which reduces erosion and pollution in our waterways and may reduce the effects of flooding.

Ironically, trees grown around public spaces within the metropolises have been cut down without replacing them with new ones. Hitherto, trees were planted along the streets and some community reserved spaces which have now been cut down for buildings and business purposes.

When plants grow in an area, the roots of plants dig deep into the soil and create space between soil particles. When it rains in highlands, water that flows downhill gets drained into the space created by the root system of plants. Due to this, chances of flooding is greatly reduced. When plants are absent, especially in rocky areas, rocks prevent water from seeping into the ground.This phenomenon is also observed in paved roads.

Since there is no room for water to seep, flooding occurs in nearby water bodies. When a layer of water runs off a rocky surface, it reduces friction and the following layers of water will run more freely as there is less friction. If more water goes into rivers and lakes than they can handle, these water bodies tend to overflow, hence flooding.

It is therefore important to introduce a tree planting day in schools to inculcate the habit of tree planting and nursing among the school children which would eventually trickle down to the whole society.