Group to check misuse of drugs in Sabon Zongo formed

July 22, 2019 General News Comments Off on Group to check misuse of drugs in Sabon Zongo formed 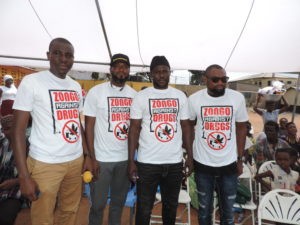 Zongo  Against Drug (ZAD), a civic pressure group, has been formed at Sabon Zongo in the Ablekuma Central Municipality, to check misuse of drugs by the youth in the area.

It also aims at championing the cause of sensitising the youth about the dangers of drugs, its consequences and help them to abstain from it.

Mr. Abdul Rahim Salifu Ango, Chairman of the group and a Clinical Psychologist at the Korle Bu Teaching Hospital, told the Ghana News Agency that, the group would create awareness among the muslim youth in Accra, on avoiding negative practices in society and to uphold high moral principles.

ZAD, he said, is a non-partisan group, whose membership cuts across the political divide, adding that, it comprises opinion leaders of the community and some chiefs too.

He said it seeks to stimulate action among policy makers and the public to recognise and take pragmatic measures to discourage the youth on deviant and immoral acts.

Mr. Salifu Ango said Information and Communication Technology (ICT) tools presented more opportunities for the muslim youth and there is the need to prepare themselves to play meaningful roles in the country.

He said ZAD intends to work in partnership with private and public sector institutions as well as international Non-Governmental Organisations(NGOs) committed to the same goals.

He expressed the hope that the media would continue to play its critical role of informing and educating the public about the concerns of ZAD.