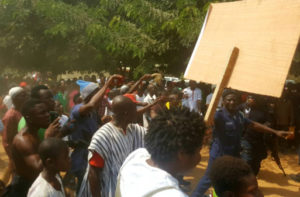 Chief Superintendent of Police Patrick Kwapong, Dodowa Police commander, told the media that, the Police had given the protesters ample time to register their displeasure.

He added that, the protesters where pelting the police personnel with stones, a situation that compelled the police to disperse them.

The Ghana News Agency observed that some of the protesters were injured as a result of the severe beating while others were arrested and sent to the Dodowa police station for further interrogations.

The police had already picked 13 workers over alleged diversion of materials which belonged to the AFCONS infrastructure company limited.

The workers, in their response, told the GNA that the allegation were untrue but a calculated attempt by the authorities and the police to intimidate them.

Mr. Emmanuel Tenedu, who represented the outsourcing companies, addressing the media, stated that the workers had no such entitlement to work directly with  AFCONS infrastructure limited since the  third party agencies recruited and deployed them to the company

According to him, the actions of the workers were illegal and  he would ensure that the  workers were brought to book.