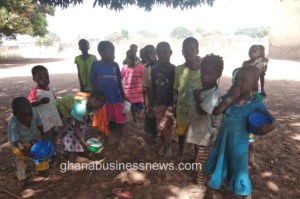 A research conducted by the Department of Children, Ministry of Gender, Children and Social Protection (MoGCSP) has revealed that children experience violence at school, with a little over 80 per cent of the children reporting that the corrective method used is the cane.

The research also indicated that other corrective methods included extra duties 7.34 per cent, counselling 5.87 per cent, physical drills 3.52 per cent, suspension/expulsion 2.04 per cent, scolding 0.76 per cent and denial of food 0.02 per cent adding that, 50.8 per cent of children experience violence at home.

This was revealed at a meeting to validate the key findings of the situational analysis of Ghana’s children, which was undertaken in 2018.

In this work, children themselves express their most secret and intimate thoughts and fears, their hopes and dreams.

It is for this reason that the Gender Ministry in collaboration with OAfrica and the European Union launched a campaign to “Stop Violence Against Children” in the country.

The campaign is an important initiation by OAfrica, which seeks to draw public attention to suppress all actions that perpetuate violence against children at home, school, workplace, justice and welfare institutions, and community settings.

Mrs Cynthia Morrison, the Minister of Gender, Children and Social Protection, in a speech read on her behalf by the Chief Director, said children were not supposed to be punished but corrected because punishment deforms them.

Ghana value children and had over the years promoted their wellbeing in their communities through innovation programming and policies, she stated.

She said though the country had made strides in addressing children’s rights in the area of health, education, social welfare, and justice there was still a lot of work to be done to ensure Ghana-fit-for-all-children.

Mrs Morrison said the study conveys the views of children on issues affecting them, highlighting comprehensive details about the quality, accessibility and availability of education, health, water, sanitation and social welfare facilities and services that are available to them.

The findings of the report however, indicated that 51.2 per cent of the children sampled did not possess birth certificates, an indication of the need to further strengthen the capacities of the Births and Deaths Registry to make sure every child has that document, the Minister said .

“Another important revelation of the study is that some children still drop out of school due to varying reasons in spite of the various social interventions instituted by government.

According to the children sampled, corporal punishment still prevails in schools, in spite of the tough stance by the Ghana Education Service (GES) to ban it,” she stated.

The Minister called on all Child Rights and Protection Actors to find suitable strategies for addressing children’s needs, including the allocation of requisite resources at the national, regional, local and household levels.

“The new Ghana Education Service guidelines require that the cane should not be used in schools and we have therefore identified a substantial gap between policy and implementation, and will focus on this for our second campaign,” she added.

Mr Christian Ashiagbor Platini, the O Africa representative, at the event noted that this form of corporal punishment was pushing them out of families.

Mr Platini said there must be an end to violence against children because beating a child is not in his or her interest but against their fundamental human rights.

He therefore advised parents to demonstrate good values for their children to learn from and also urged teachers come up with proper measures for nurturing and do away with the cane.

The European Union representative commended the Department of Children for the findings adding that this would close the gap between legislation and practice.

She said Ghana needed to create a country free of violence and violence against children as this was key to their future development.