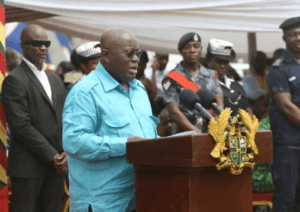 The two projects are the Accra Sanitary Sewer and Storm Water Drainage Alleviation Project at the Kwame Nkrumah Circle and the Drainage Construction at Kaneshie 1st Light Intersection, being undertaken under the auspices of the Ministries of Water Resources and Sanitation; and Works and Housing.

The President has severally stated his resolve to ensuring that Accra became one of the cleanest and most resilient cities in Africa.

Tuesday’s inspection was to apprise himself of the measures being taken to reduce flooding in the capital city, especially through the storm drainage projects, to protect lives and property anytime there was a downpour.

Dredge Masters Limited, the engineers working on the Accra Sanitary Sewer and Storm Water Drainage Alleviation Project at the Kwame Nkrumah Circle, told the President that the work they had undertaken, so far, would drastically reduce flooding at the Circle area and its environs and contain this year’s rainfall.

Captain Khan, a Water Engineer with Dregde Masters, said the company had extensively dredged and desilted the Odaw River, creating a passage for the flood run-off waters to the Korle Lagoon and that in the next 18 days there would be enough passage into the sea to control any kind of situation.

The President then took Dredge Masters on their word and said he would return to the project site in 18 days to ascertain the progress of work.

The Circle project was awarded on contract for two years in June, 2016, to Dredge Masters Limited to disilt and dredge the Odaw channel and restore the Korle Lagoon to prevent constant flooding of Accra during the rainy season.

The scope of work involves the dredging of channel from the Odaw Onyasia confluence at Caprice in Accra, through Avenor, Kwame Nkrumah Interchange, and the Agbogbloshie-South Kaneshie Drain (the Upper and Lower Lagoon).

Dredge Masters commenced dredging works on the channel in April 2019. The company intends to restore the drainage efficiency and holding capacity of the channel within six months.

Another Engineer on the project, Wise Ametepey, told President Akufo-Addo that dredging the channel had become difficult as a result of the continuous dumping of solid waste into the river by the inhabitants around the project area.

However, the challenges, notwithstanding, would take about six months to completely clean the Odaw, but the Korle Lagoon would take a longer time to desilt.

Mr Ametepey informed the President of the beautification component of the project, that involves the landscaping and the construction of world-class tourism attractions on the immediate environs of the Odaw River and Korle Lagoon to revive that ecosystem and prevent people from defecating or throwing waste in the drains.

He called on the inhabitants of the area to desist from throwing plastic waste into the Odaw River after the dredging work is executed as that it was the only way to safeguard the water body.

Mr George Asiedu, the Supervising Engineer, indicated that the project, which was scheduled to be completed by the end of June, 2019, had already proven its design positives, as the area did not experience the usual flooding after the heavy downpour on May 20.