May 22, 2019 General News Comments Off on Government to unveil new policy measures on sanitation 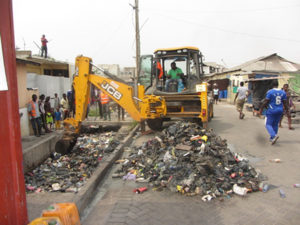 The measures are intended to complement the already existing ones as well as the efforts of the Metropolitan, Municipal and District Assemblies.

A statement signed by Mr Nelson Kofi Akatey, the Public Relations Officer of the Ministry of Sanitation and Water Resources and copied to the Ghana News Agency noted that Mrs Cecilia Abena Dapaah, the Minister of the Sector announced the Government’s intention on the new policy measures.

She announced it during the inauguration of the Kpone-Katamanso Sanitation Strategy and Quarterly clean-up exercises initiated by the Assemblies.

Mrs Dapaah also inaugurated a 10-member Steering Committee for the implementation of the Sanitation Strategy and quarterly clean-up exercises in the Metropolis.

According to the statement, the programme formed part of the activities by the Kpone–Katamanso Municipal Assembly to ensure that the Municipality was one of the cleanest in pursuit of the National Sanitation Campaign.

Mrs Dapaah who was the Guest of Honour commended the Assembly for the initiative, which she described as laudable, the statement said.

The Minister said the country could only leverage on tourism and industrialization policies if it had a clean environment to attract tourists and investors, adding that, it needed to develop a conscious attitude to clean its environments to contribute to national development, the statement said.

She noted that Accra alone generated 5,000 tons of solid waste and 3,000 tons of plastic waste, which could be harnessed to transform the economy and create 5,000 jobs for the youth.

“Government is attaching great importance to waste processing and recycling to transform waste into wealth and is prepared to live up to its responsibility by adequately providing all needed resources to complement the efforts of the Assemblies,” the statement noted.

The Minister, the statement said, called on the Assemblies to enforce bye laws on sanitation and come out with pro-active measures to drive the sanitation agenda.

She also said it was necessary for the Assemblies to improve on advocacy and consider the option of communal labour by people who flout the laws as well as the imposition of fines rather than custodian sentences.

The statement said the Ministry would continue to monitor and evaluate the performance of the Assemblies, adding that, the Minister gave the assurance that the Kpone-Katamanso Municipal Assembly would receive dustbins.

According to the statement, Mr Solomon Appiah, the Municipal Chief Executive (MCE) said the issue of sanitation was a major challenge which confronted many countries including Ghana.

He said the vision of the President to make Accra the cleanest city in Africa and subsequently establishing the Ministry of Sanitation and Water Resources demanded the commitment and support of all to achieve the objective, the statement said.

The impact of poor sanitation on health and the economy, he said, was quite huge and therefore needed to be addressed.

The MCE, according to the statement, said the Assembly would play its role to bring the vision of the President into reality.

He called on the people in the Municipality to change their attitude and behaviour towards sanitation and be agents of change.

The statement disclosed that the Minister made a brief visit to the Kpone Landfill site to ascertain the conditions at the place and gave the assurance that the road network to and within the site would be reshaped and given a facelift to enable the trucks to have easy access to offload their refuse.

The Minister was accompanied by the Acting Chief Director, Joseph Obeng Poku and the Heads of the various Directorates and Units of the Ministry.