People with HIV and AIDS have started reporting about stigma – Commission

February 26, 2019 General News Comments Off on People with HIV and AIDS have started reporting about stigma – Commission 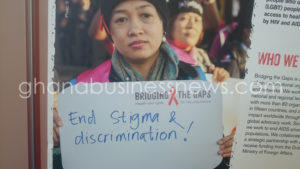 The Ghana AIDS Commission (GAC) in Upper West Region has expressed joy that people living with HIV and AIDS now muster courage to openly report discrimination and stigmatisation perpetrated against them in society.

This is a breakthrough, since the Ghana AIDS Commission Act, Act 938, was passed in 2016 to criminalise HIV and AIDS related stigma and discrimination, but had never been operationalised due to “fear of being treated with contempt”.

Mr Dramani Yakubu, the Upper West Regional Technical Coordinator for GAC, told the Ghana News Agency that at least four people in the region had reported to the Commission since the beginning of this year.

“This is good news, it is the first-time people with the virus come openly to the Commission to report about stigma and discrimination, at least, it shows that the message has gone  out there.

“We have to step up our messages to the people to protect their fundamental rights”.

He cautioned people to stop stigmatisation against People Living with HIV/AIDS to enhance national response to the canker as the situation discouraged people from testing to know their status and violated their fundamental human rights.

Section 28 clause 2 of the Act states, “A person shall not directly or indirectly discriminate against a person infected or affected by HIV or AIDS based on the actual or Perceived HIV status of that person or of a close associate of that person.

“People with HIV/AIDS are entitled to the fundamental human rights enshrined in Ghana’s 1992 Constitution which is further espoused in the GAC Act, Act 938 of 2016.

“Any attempt by a person or group of persons to violate the fundamental human rights of People Living with HIV/AIDS is not only immoral and unacceptable, but also constitute a crime punishable by law,” Mr Dramani said.

He added that stigmatisation remained a hindrance in the national response against the disease because due to fear of stigmatisation, people were afraid to disclose their HIV status to their partners leading to further spread of the disease.

“Your girlfriend or boyfriend due to stigmatisation is unlikely to tell you she or he is infected with the disease because he or she is afraid that you might leave him or her,” he said.

The Commission is intensifying its efforts to sensitise the populace on the negative effects of stigma and discrimination and is also working to achieve the 90-90-90 Fast Track Targets which at  getting 90 per cent of persons living with HIV to test to know their status by 2020, 90 per cent of those who test HIV positive to be on sustained anti-retroviral medication, and 90 per cent of those on the medication to achieve viral suppression.

Mr Dramani said it was important to achieve the targets because persons with HIV who have achieved viral suppression were unlikely to be able to infect others with the virus.

The Commission recently launched the “Free to Shine (F2S)” Campaign championed by the First Lady, Mrs Rebecca Akufo-Addo, and supported by the Organisation of African First Ladies against HIV and AIDS (OAFLA).

The F2S campaign seeks to Mobilise African First Ladies and other high-level leadership to increase awareness, further strengthens ownership and accountability to end AIDS in children.

It also seeks to keep mothers alive, cultivate partnerships and advocate action to mobilise resources to end paediatric AIDS and Foster community involvement and participation to increase ownership of the Elimination of Mother to Child Transmission (EMTCT).

In 2017, the HIV and AIDS prevalence slumped from 2.5 per cent in 2016 to 1.3 per cent in 2017 in Upper West, which Mr Dramani attributed to the collective efforts of stakeholders.