Lack of ambulances in Upper East is worrying – Regional Minister

February 19, 2019 General News Comments Off on Lack of ambulances in Upper East is worrying – Regional Minister 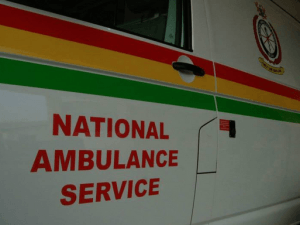 Madam Paulina Patience Abayege, the Upper East Regional Minister has expressed concern about the lack of ambulances to transport medical cases and casualties within and outside the region.

“If we have a serious health issue now, we either have to put the person in a pickup or wait for an ambulance to come from Accra or Tamale. I know we are expecting government to do that, but while we wait for government, what is it that we can do to support,” she said.

Madam Abayege who expressed the concern at a meeting with corporate bodies and institutions operating in the region, said the purpose of the meeting was to find out what corporate institutions were doing to support the Region.

She said “as I speak with you, we do not have a Regional ambulance that is working,” and indicated that the engines of some of the broken-down ambulances needed to be changed, while others needed some spare parts to get them on road.

When the Ghana News Agency contacted Mr Ali Baba Awuni, the Upper East Regional Administrator of the National Ambulance Service (NAS) to ascertain the current ambulance situation in the Region, he said there was only one ambulance for the entire Region which could not move beyond Walewale, in the West Mamprusi District of the Northern Region.

Even though the Minister acknowledged that some institutions were living up to their corporate social responsibilities in the various communities they operated, she charged them to do more to better the living standards of the people of the Region.

She said there were schools in communities within the Region without furniture, and institutions could have taken them up as their corporate social responsibility to help, “let us be able to do things for our own community, then government can come in with the big ones,” she added.

For instance, Madam Abayege said if all hotel operators in the Region came together to at least contribute GH₵1,000 each, they could solve some of the pressing needs such as the issue of ambulance, because “we need to fix that.”

“Recently, I am told Bank of Africa renovated the kids ward at the Regional Hospital, those are the things that we should be talking about,” she emphasized, and called on all corporate bodies to emulate such gestures in other sectors, adding that “I have seen a lot of our schools crying for tables and chairs.”

He said management of the company was officially informed about the ambulance situation in the Region, and they had discussed on how to support in that regard, “we are particularly concerned about it because we work in an industry that is so hazardous to the people and so we even need ambulances more than any other person in the Region.”

Madam Eva Agana, a Lecturer at the Millar Open University said it was important to use the diverse cultures and resources within the Region to solve some of its problems, and disclosed that the University has come out with some technology that enabled them to plant grasses around water bodies in mining areas that soak out mercury from water bodies as result of mining, and after sometime the water become save to drink.