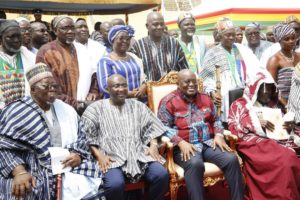 President Nana Addo Dankwa Akufo-Addo on Tuesday presented the Constitutional Instrument (CI 116) that gives effect to the creation of the North East Region of Ghana to the overlord of the Mamprugu Kingdom, Nayiri Naa Bohogu Abdulai Mahahami Sheriga in Accra.

The North East Region is the first of six regions created after last year’s referendum to receive its Constitutional Instrument. Officially the 11th region of Ghana, it was carved out of the Northern region.

At a historic and colourful ceremony at the forecourt of the Jubilee House in Accra, President Akufo-Addo named Nareligu in East Mamprusi district as the capital of the North East Region, and also charged the current Northern Regional Minister, Salifu Saeed, to take charge of the new region until a substantive minister is appointed.

The North East region was one of the areas to record the highest margin of Yes votes in last December’s Referendum conducted by the Electoral Commission as a result of the demand by the people of the Volta, Brong Ahafo, Northern, Western, Eastern for the reorganisation of those regions.

The last time a region was created in Ghana was in 1983 during the era of the Provisional National Defence Council, when the Upper West Region was carved out of the Upper region as the 10th region in Ghana.

The creation of the new regions was a promise President Akufo-Addo made in the run-up to the 2016 elections; and results from the December 2018 referendum recorded over 90 per cent endorsement of the newly-created regions.

President Akufo-Addo assured the people of the North East Region that the areas would witness substantial development, as his government had earmarked an initial amount of GH¢20 million for projects in the region.

He said his Administration would ensure that the desire for growth, progress and prosperity, which informed the creation of the regions was fulfilled.

The Nayiri, on behalf of the people of the North East Region, thanked the President and the Government for the creation of the region, saying, “the overwhelming endorsement of the people during the referendum gives ample testimony of how dear the region is to the people.”

“The expectations are so high…and we owe you a huge debt that we cannot pay till the end of time.”

“I wish to assure you that the North East Region is the vehicle to drive the development agenda of the people in the region…we shall partner government to make sure that the engine of this vehicle is at all times well-oiled to keep it in perfect state and function,” Nayiri Bohogu Abdulai Mahami Sheriga assured the President.

He said the potential of the region, which had a fair share of the country’s natural resources, should be taped for national development and that, it that would materialise when there was peace.

“We shall do all within our means to maintain the peace and social harmony we are currently enjoying, assuring further that the traditional authorities would work to ensure that any potential source of conflict in the area was nibbed in the bud.

“Let us be mindful of the fact that conflicts pose a serious threat to development and the very survival of mankind. The key to growth, prosperity and development throughout history is peace,” he told the people of the region.

He called on the political leadership and duty bearers to gird their lions and work harder to accelerate the pace of development in the region.