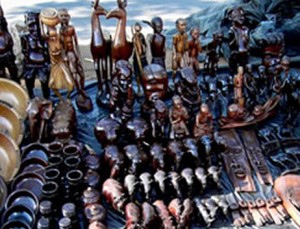 Fake artefacts dealers operating around the vicinity of the Accra Art Centre, Ghana’s biggest craft market is threatening the existence of the art village as they flood the area with substandard goods.

The fake artefacts dealers stand at vantage points around the Art Centre and along the Professor John Evans Atta Mills High Street persuading tourists to buy their cheap wares at cheap prices thereby preventing them from entering the art market.

Other fake artwork dealers have also pitched camp at some markets with the substandard goods.

Scores of traders at the Accra Art Centre complained to the Ghana News Agency in Accra during a tour of the ‘Art Village’.

Madam Ruth Alabi (Aunty Mee) of Mama Heritage Shop at the Art Centre told the GNA that patronage at the centre has dropped tremendously over the years as a result of the fake dealers.

The Fake Dealers infiltrate the Art Centre “take pictures of paintings, craft works, African print designs, beads, bags and other art works and send it to China to produce similar ones with inferior material which are brought back to markets to sell at cheaper prices,” Madam Alabi stated.

She called on the Ministry of Trade and Industry and the Government to assist in protecting our local products “for instance an African print in the art market is sold between GH¢70.00 to about GH¢50.00 whiles fake dealers sell the substandard ones between GH¢20.00 and GH¢30.00.

Madam Alabi called for measures to protect the Art Centre, which has become a tourist attraction.

She cautioned people who patronize these products mainly based the price to be careful.

She however commended President Akufo-Addo for consistently using Ghanaian wear. “We also encourage host of other workers, public servants, bank officials and others who have now developed taste for local products. They must however come to the Art Centre for authentic goods”.

Nii Ardey Ankrah, Public Relation Officer of the Centre said the marine drive project has impaired the development of the centre because most of the traders have been informed about a relocation exercise to be conducted soon.

He said these art works are mainly patronage of by foreigners who visit during festive seasons such as Christmas, Easter and other festive occasions.

Mr Lawrence Delali Awuah, Manager of the Centre complained about the activities of “Kiri boys” guys who serve as intermediaries between customers and the centre selling artefacts at exorbitant prices creating the impression that things are expensive at the centre.

He dismissed suggestions that some of the artefacts possess spiritual or super natural powers, stressing “these thoughts are expressions of arts in wood even though some traditional worshippers use such images as symbols and mediums of worship”.

Mr Awuah blamed the misconception on the movie industry in Ghana and Nigeria, “where art works are portrayed to possess spiritual powers”.