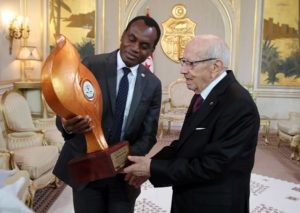 President of the African Court on Human and People’s Rights, Justice Sylvain Ore, has said the Continental Court embraces 2019 with a pedestal of hope and great potential for the implementation of reforms.

He said the 2019 African Court’s reforms will be driven, both from within and by the coordinated reforming wave of the African Union as a whole, as the Court has been methodically preparing for this as much as it is resolutely ready for it.

“With regard to reforms undertaken from within, by launching the third wave of recruitment of counsel on its list, the African Court will finalise the establishment of the legal aid fund and the dissemination of documents relating to this mechanism,” Justice Ore told the Ghana News Agency in an interview.

He said the continental court would modernize its judicial work, as the digitization project would continue and be completed at least with respect to the design and pre-implementation phase of the transition from manual to digital case management.

The African Court President said, it will also continue its cooperation with States and other relevant stakeholders, including civil society, advocacy groups and academic institutions.

He said the strengthening of cooperation would extend to providing a new impetus to the continental and inter-continental judicial dialogue, in particular through tripartite cooperation between the African Court and the European and Inter-American Courts of Human Rights.

“The African Court will also initiate a new cycle of interaction with national courts through multilateral or country-specific technical exchange projects,” he said.

With regard to judicial work, the President said, engagements initiated by judges with officers of the Court, especially in the Legal Division, will focus on a reorganization of methods and procedures, particularly with regard to the handling of cases.

He said the stated aim of the African Court 2019 reforms is to increase the number of decisions and substantially clear the emerging backlog by focusing in particular on older cases.

“These actions will benefit from the consistent implementation of the new communication strategy which was adopted by the Court in 2018. With this new strategy, the Court intends to achieve the visibility required for such important action as the administration of justice at the continental level.

“Particular attention will be paid to communication around the judicial work of the Court, especially with regard to the preparation of sessions, the status of cases, public hearings and the publication of decisions,” he said.

He said this year will also witness the launch of the first volume of the African Court Law Reports, which aims at contributing to enhancing the visibility of the Court’s action on the continent and beyond.

On a review of 2018, the African Court President said, the progress achieved during 2018 and the prospects forecast for 2019 are the result of the concerted action of various stakeholders, including the Court itself but foremost the African Union, its Member States, organs, and litigants.

He said also commended African and international civil society, and all other partners and members of the human rights community in Africa.

Justice Ore said, the African Court welcomes the support of these various actors, which it wishes to see strengthened with a view to achieving the objectives outlined for 2019.

“This sustained cooperation, in particular with States, the Union’s other human rights bodies and litigants from various parts of the continent and elsewhere, is in line with our “collective responsibility” to uphold human rights, as proclaimed in the relevant chapter of the Union’s Agenda 2063,” he said.

He said the African Court is justifiably proud of its achievements in 2018.