Implementation of ROPAA should be on Everywhere or nowhere principle – NDC

January 4, 2019 Politics Comments Off on Implementation of ROPAA should be on Everywhere or nowhere principle – NDC 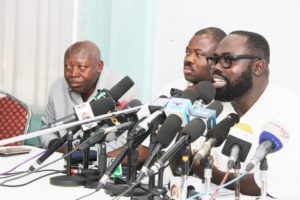 The National Democratic Congress (NDC) on Thursday said if ever Representation of the People’s Amendment Act (ROPAA) would be implemented, it should be on an “everywhere or nowhere” principle.

According to the Party, so far as it was concerned, every Ghanaian living everywhere on earth must be afforded the opportunity to vote in the national elections.

Mr Peter Boamah Otokunor, the Deputy General Secretary of the NDC, said this at a media briefing in Accra to share its concerns on the just-ended referenda.

He said if the government and the Electoral Commission perceived that as an opportunity to let only living places where the ruling New Patriotic Party (NPP) supporters dominated to vote, to swing elections in NPP’s favour, then they were grossly wrong.

He said the NDC was represented on the Advisory Committee on ROPAA set up by the Electoral Commission to work out modalities for its implementation and there were several issues they would clearly articulate during the committee’s deliberations.

On the Ghana Card and the New Voters’ Register, he said the National identification Authority (NIA) had failed to heed calls from well-meaning segment of society to include the voters’ ID card in the lists of identification materials for registration in the national registration Exercise, yet, the same ID cards qualified voters, to vote in the just-ended referenda.

Mr Otokunor said the Party would not accept any new electoral register compiled based on the Ghana Card, which excludes voter ID cards as a means of identification or registration.

“The NDC is currently holding consultations on the way forward for our members in relation to the on-going Ghana Card registration and we would be issuing directives in that regard in the coming days,” he said.