Be mindful of new threats to global security – Akufo-Addo

January 4, 2019 General News Comments Off on Be mindful of new threats to global security – Akufo-Addo 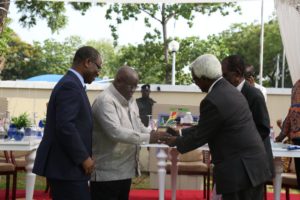 President Nana Addo Dankwa Akufo-Addo has asked officers of the Research Department of the Foreign Affairs Ministry to be mindful of new threats to global security and their duty to remain professional.

Addressing a special durbar held to mark the 60th anniversary celebration of the Department, he said they should continue to be loyal to the nation.

The Research Department was set up in December 1958 by Ghana’s first President, Osagyefo Dr. Kwame Nkrumah.

President Akufo-Addo praised Dr Nkrumah for his foresight and recognized the assistance of the then Prime Minister of India, Jawaharal Nehru, and his government, which helped in the training of the pioneer officers by providing its first two Directors.

He noted that the Department “has lived up to its goals” and described it as “an excellent example of an organization holding firm unto its character, integrity, standards and values, through the years”.

He gave high marks to the past and present directors, management and staff for their invaluable contribution towards the conduct of Ghana’s foreign policy and the sustenance of the peace and stability of the country.

He pledged his government’s continued support.

Mrs. Shirley Ayorkor Botchwey, the Foreign Affairs Minister, said the “overall contributions of the Department have in many ways not only shaped policy formulation, but more importantly helped successive governments to defend and protect the sovereignty of Ghana and promote peace and stability in the sub-region”.

Its consular role has aided the Ministry to fulfil its oversight responsibilities to boost the welfare of Ghanaians abroad and raise revenue for the country.

Mr. Albert Kan-Dapaah, the Minister of National Security, applauded the professionalism of the officers and their dedication to duty.

He urged the current leadership to build on the solid foundations of the past 60 years.

Ambassador Peter N. Opata, the Director, said they were fully aware of their mandate, the record of the past, and determined to position the Department to meet new challenges.

They were “fully alert to new threats that seek to undermine our corporate existence, institutions of state, democracy and the rule of law” and would take all necessary steps to live up to their mandate.

President Akufo-Addo was honoured with the highest award of the Department, “The Supreme Eagle”.

All past 23 former Directors and some retired and serving officers including former President Hilla Limann, who served as an officer of the Department, were also honoured.