Notable Ghanaians who died in 2018

December 28, 2018 General News Comments Off on Notable Ghanaians who died in 2018 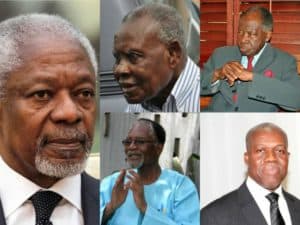 In the course of the year 2018, Ghanaians said goodbye to many famous figures who made their marks in the field of politics, global peace, justice delivery, academia, entertainment and journalism.

Among the many legends who passed away were former Vice President Paa Kwesi Bekoe Amissah-Arthur and Mr Kofi Annan, a former United Nations Secretary-General.

Other eminent persons who passed on in 2018 include Mr Emmanuel Kwabena Kyeremateng Agyarko, the New Patriotic Party (NPP) Member of Parliament for Ayawaso West Wuogon in the Greater Accra region; and Mr Francis Sasu, the Head of News and Current Affairs of Atinka Media Village.