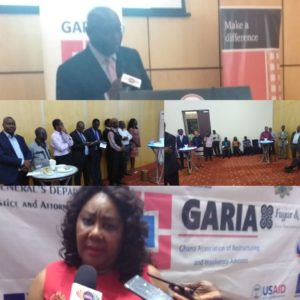 The Bill will ensure a significant impact in the business environment, provide a framework for restructuring viable businesses, closing and the transferring of assets of failed business.

The President of GARIA, Mr Felix Addo made the call at its end of year cocktail reception on the theme: “Towards Enhancing the Ease of Doing Business: The Journey So Far in Reforming the Companies and Insolvency Bills”.

He said an effective insolvency would prevent the premature dismemberment of a debtor’s assets by individual creditors seeking quick judgments.

Mr Addo said, an insolvency regime sought to protect the interest of all stakeholders, which includes persons who can affect the activities of a company. “Transparency is one of the Cardinal principles of an effective Insolvency regime,” Mr Addo said.

The President said the Bill when passed, will deal with the official liquidation of companies in relation to the provisions of the Bodies Corporate Act, 1963 (Act 180).

“The companies draft Bill is currently before parliament, however, the draft Corporate Insolvency bill has not traveled that far” he said.

Mr Addo said the Association was aware that the Companies Bills is currently before cabinet and was optimistic that it would be passed into law next year, and hopefully that of the corporate insolvency bill.

He said under the new Companies Bill, the Office of the Registrar of Companies would stand on its own to handle only corporate related registrations.

The Registrar General, Mrs Jemima Oware, said from 2019, Companies not registered with the new operations would be wiped out of the Register of Companies and would therefore cease to exist.
She said: “Every business since 1963, before the automation process started, up to 2011, that had not yet updated their record into the Registrar’s new database should do that because from April 2019, I will put out the names of those businesses and start the striking out process”.

The GARIA aims to encourage restructuring of distressed entities including state-owned enterprises and other business establishment to promote and play a leadership role in connection with business turnaround and insolvency.
Source: GNA