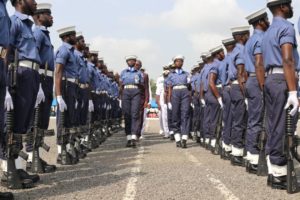 Two hundred and sixty-seven (267) out of two hundred and seventy-four (274) recruits have successfully been transformed and graduated into the Ghana Navy.

The recruits – BT 81 – who were admitted to NRTS (which is under the Navy Training Command – NAVTRAC), from July 15, 2018, had undergone instructions in First Aid, Naval Stores, rope-work, fire-fighting, military laws among others, had five of them released for misconduct, whiles one of them – Frank Ayerh – passed away at the 37 Military Hospital.

The ratings, who exhibited great skills in silent drills at their Passing Out parade were cautioned in an address by Commodore Michael Kweku Addison (rtd), to remain disciplined and to refrain from acts that would tarnish the great image of the Ghana Armed Forces.

Commodore Addison, a former Flag Officer Commanding (FOC), was the one under whose command; the parcel of land intended for the NRTS, was negotiated for and acquired from the traditional authorities.

Some of the dignitaries present were the District Chief Executive (DCE) and Member of Parliament (MP) for South Tongu, Louis Agamah and Kobla Woyome, respectively, the FOC for NAVTRAC – Commodore Eric Adu together with other heads of security agencies in the region.