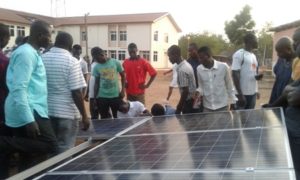 The event, held in Tamale and supported by Danish Development Agency, was to build the capacity of members of Certified Electrical Wiring Professional Association of Ghana (CEWPAG).

He said the project would reduce dependence on foreign electrical contractors who have dominated in Ghanaian market and charge high fees for services.

Dr Agyenim Boateng said the training would also assist in increasing solar power generation capacity from the current level of 22.5MW and develop a non-constrained transmission network by 2020.

He said the project would facilitate the achievement of the 10 per cent contribution of modern renewable energy in the electricity-mix by 2030.

Mr Eric Nyarko, a participant at the event, said “Ghana is well positioned with adequate radiation to generate sustainable solar power to meet our energy needs”.

He said the monthly average solar radiation in different parts of country ranges between 4.4 and 5.6kWh/m2/a day.

He called on to the trainees to join the effort in developing solar systems for electricity generation and to promote its use in the country.

Mr Emmanuel Arthur, the Project Manager of TELSOL KA Limited, advised the trainees to use the skills they have acquired during their seven day training to build their capacity and help the country to attain its goal of 10 per cent mix of solar power energy generation by 2030.

He urged them to work hard to promote the use of solar systems to expand and compete with foreign contractors.

The participants were presented with certificates after the training.