Madina-Adenta footbridges will be disability-friendly – GHA

November 26, 2018 General News Comments Off on Madina-Adenta footbridges will be disability-friendly – GHA 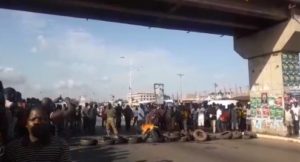 The Ghana Highway Authority (GHA) on Friday assured the public that the furniture on the six footbridges along the Madina-Adenta Highway is being designed to be disability-friendly.

Ms Diana Seade, the Public Relations Officer (PRO) of the GHA, told the Ghana News Agency in Accra that, the Authority had taken a holistic approach in solving the problem with the footbridges once and for all.

“Paramount on the list is that our design is made to make crossing accessible for disabled persons,” the PRO assured.

Members of the Ghana Federation of the Disabled (GFD) recently sounded a word of caution to the Government that it would head to the court if the footbridges are not disability-friendly.

Ms Seade said the contractors for the project have started work on the six footbridges and expected to fix stairs and other furniture on them, erect crash barriers on the stretch, provide road line markings for motorists and pedestrians as well as construct wire mesh to prevent crossing at unapproved areas.

She said some dysfunctional traffic lights and streetlights had been restored to improve visibility on the stretch and asked for co-operation from the residents in the area to ensure timely completion of the footbridges.

Mr Kwasi Amoako-Attah, the Minister of Roads and Highways, who led a delegation to the place on November 9, 2018, told journalists that the contractors have been tasked to complete the footbridges within four months.

On Thursday, November 8, a taxi-cab reportedly knocked down a female student of the West African Senior High School, killing her instantly, which sparked violent protest from the youth.

They blocked the road and burnt car tyres to prevent the movement of vehicular traffic.

It took the timely intervention of the Police and personnel from the Fire Service to remove the blockade and douse the fire to restore sanity to the place.

The stretch is reported to have claimed 24 lives according to statistics from the Ghana Police Service, but the residents put the figure at 194 largely due to the absence of footbridges.

The highway was said to have been completed about seven years ago but it was not properly handed over to the government due to some outstanding arrears owing the contractors.

EC registers more than 16 million voters at end of exercise

Ghana police told not to seize equipment of journalists