Ghana has become biggest importer of onions from Niger 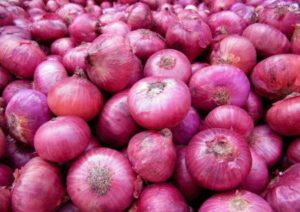 Ghana, like most African countries that signed the Maputo Agreement to allocate at least 10 per cent of their annual budget to agriculture, is the biggest importer of onions from landlocked West African neighbour, Niger.

According to latest statistics from the Ghana Statistical Service on the country’s GDP, year-on-year, the industry sector recorded the highest growth of 11.1 per cent, while the agriculture sector followed with 4.8 per cent and services with 0.5 per cent.

The quarter-on-quarter agriculture recorded 1.0 per cent, the industry sector followed with 2.7 per cent and services recorded 0.1 per cent respectively.

Niger produces some one million metric tonnes of onions every year and Ghana has become its most important customer, importing more than 43 per cent of all onions produced in that country to the tune of about GH¢502 million or approximately $107 million every year. The country also imports some $100 million worth of tomatoes from Burkina Faso.

This emerged during a workshop organized in Accra by the West Africa Food Markets (WAFM) Programme which is sponsored by the UKaid and supported by the Borderless Alliance.

The aim of WAFM is to address food security and to enhance staple food trade along two major corridors; that is Ghana-Burkina Faso and Nigeria-Niger.

Speaking at the workshop today, October 19, 2018 to review a Cross Border Trade Guide on Import and Export Provisions on Specified Processed Cereals, such as cassava, millet, maize and sorghum, Noel Kossonou of WAFM said since its inception in 2014, the programme is expected to end in 2019, 4,731 tonnes of staples have been traded across the four countries as a result of grantee business models.

According to him, a Challenge Fund of £8 million is available to be accessed by local businesses that want to be part of the trade in the four countries. The businesses however, are required to provide matching fund of the amount of funding they require. He said so far, the programme has disbursed £6.9 million with more than £10 million committed in co-financing through banks, and £6,5 million worth of staples have been traded through grantee business models, adding that the businesses, have purchased £9.1 million worth of staples from smallholder farmers.

The guide, which is under review is expected to be used to facilitate the ECOWAS Trade Liberalisation Scheme (ETLS) involving all the 15-member countries.

The programme’s overall objective is to create conditions for ease of trade among the countries, such as less time spent at the borders, less or zero checkpoints and uniform paperwork for cargo trucks transporting these staples, in as long as the exporters and importers fulfil the requirements for the trade, by making all the regulations and requirements available to traders in one booklet.

The guide will be reviewed with input from the ECOWAS before it is finalized for use.