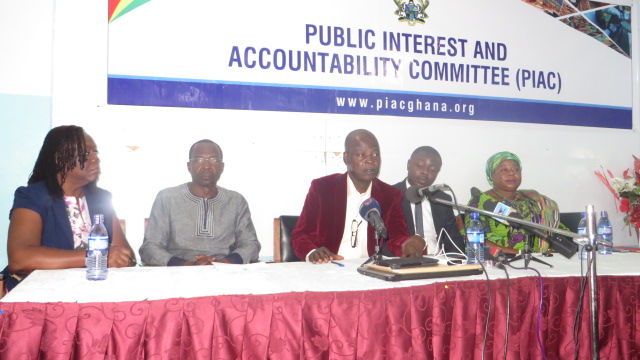 The Public Interest and Accountability Committee (PIAC) says it is dissatisfied with the response of the Ministry of Finance on the whereabouts of an unspent amount of GH¢403.74 million Cedis.

It has, therefore, reiterated its call on the Ministry to provide further particulars as to the whereabouts and the utilisation of the said Annual Budget Funding Account (ABFA) amount to enable PIAC to perform its mandate of informing the citizenry.

The Finance Ministry had earlier in a statement repudiated claims by PIAC that the Ministry could not account for the amount.

An earlier statement signed by the Chief Director of the Ministry had said that the ABFA in 2017 received GH¢733.2 million out of which GH¢329.5 million was used to pay for projects, while the remaining GH¢403.7 million was transferred into the Treasury’s main account in 2017.

The statement said the transfer was in line with the provisions of the Treasury Single Account (TSA) in Section 46 of the Public Financial Management  Act (PFMA), 2016 (Act 921) that required that all  government balances should be part of TSA.

However, speaking at a News conference on Monday in Accra, Dr Steve Manteaw, Chairman of PIAC, said the response given by the Ministry that the said amount was transferred into the TSA in 2017 in accordance with Section 46 of the Public Financial Management Act, 2016 (Act 921)  was unacceptable.

PIAC said the act of transfer, rather raised further issues, as to “when the money was transferred into the Treasury Account”, How is the specific amount of GH¢403.74 million, being petroleum revenue accounted for?

Dr Manteaw said the Ministry’s explanation as to the transfer of the amount into the TSA, defeated the entire purpose of the Petroleum Revenue Management Act, 2011 (Act 815 ) which “was enacted  specifically to provide the framework for the collection, allocation and management of petroleum revenue in a responsible, transparent, accountable and sustainable manner”.

“To argue that the transfer was to avoid government cash balances sitting in various accounts, while Government borrows at expensive rates to finance important expenditures, suggests that the money was spent, ostensibly on programmes and activities not budgeted for under the ABFA”, PIAC said.

Dr Manteaw said PIAC would in the interest of Ghanaians work with other state institutions like EOCO, Office of the Special Prosecutor and CHRAJ to ensure that the matter was dealt with logically.