Nayorigo Primary School has no textbooks 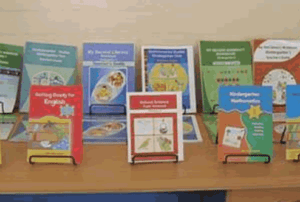 The Nayorigo Primary School in the Bongo District lacks textbooks for both teachers and pupils to enhance academic work.

A visit to the school by the Ghana News Agency saw that with the exception of Creative Arts and Information, Communication and Technology (ICT) subject textbooks that were available for only primary two, three and four, there were no textbooks of any subject for any of the other classes.

The GNA investigations further revealed that the teachers did not have textbooks to prepare their lesson notes and the pupils also did not have any reading materials to help them learn in school or at home.

This, coupled with the lack of furniture, has adversely affected academic work in the school leading to decline in enrolment figures as some parents had to withdraw their wards to better endowed schools.

According to management of the school, it has been battling textbooks and furniture challenges for a long time, in spite of efforts made to get stakeholders on education in the districts to address them.

Mr Moses Atengane Akuribire, Head teacher of the school, said he was transferred to the school this academic year and upon assumption of office, he realized that there was no single textbook in the school, not even the core subjects including Mathematics, English and Integrated Science.

The GNA saw that the school lacked furniture as primaries one, two, three and four had no single chair compelling the pupils to sit on bare floors during lessons, while some lay on their stomachs to write as classes was in progress.

Primary five and six had less than 10 dual desks each, thereby making the children sit three or four on one dual desk.

The school does not have teacher’s tables and chairs, making teaching and learning as well class exercises and assignments very tedious.

He said “last term the pupils were to undertake an examination and they had to go to a different school to write the exams all because of the lack of furniture.”

According to the Head teacher, they have communicated their grievances to the appropriate authorities including the Bongo District Education Directorate and the Bongo District Assembly in writing on several occasions but all their efforts to get positive responses proved futile.

The Head teacher appealed to non-governmental organizations, philanthropists and individuals to come to the aid of the school.

Teachers should be motivated to ensure quality delivery – Stakeholders

UDS students warned against tramadol use and occultism