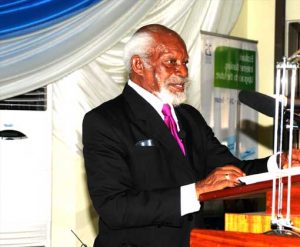 A statement issued to the Ghana News Agency, which was signed by Mr Richard Crabbe, on behalf of Crabbe and Allied families, on Tuesday, said he would be given a private burial after the service.

The Sole Statute Law Revision Commissioner and founder of the Electoral Commission, who contributed tremendously to legal reforms and education in Ghana and beyond, died on Friday, September 7,  after a short illness, aged 94.

The family said on the day of the funeral, a two-hour pre-burial filing past, would begin at 0630, while the service would start at 0900 hours at the Accra International Conference Centre (AICC).

After the burial, the final funeral rites and reception would be held at the AICC.

The retired Supreme Court Justice, hailed as one of the best legal brains Ghana could boast of, was until his passing, a professor of Law at the Mountcrest University College in Accra.

The Parliament of Ghana had recently engaged the legal luminary to help with the setting up of a legal and drafting department for the House.

The Department is to assist the Legislature with counsel on internal and external issues as well as help with the drafting of Bills, especially the Private Member’s Bill, which the House seeks to introduce.

He co-chaired the Coalition of Domestic and Election Observers, CODEO.

Justice Crabbe also carried Ghana’s flag very high internationally playing many critical roles, including being a director of the Commonwealth Secretariat’s Scheme for Legislative Draftsmen for West, East, Southern and Central Africa as well the Caribbean.

He was educated at the Government Junior and Senior Boys Schools in Accra and proceeded to the Accra Academy for the Cambridge Junior and Senior School Certificates. He went to London to study Economics at the City of London College Moorgate, London 1950-1952.

In August 1952, he was admitted to the Honourable Society of the Inner Temple to read Law. He completed the normal three-year course in two years and was called to the Bar on the 8th February, 1955 having being granted a dispensation.

The same year he was enrolled as a member of the Gold Coast Bar in order to maintain his Seniority at the Bar. He progressed from Assistant Crown Counsel to Parliamentary Counsel, the first African to be appointed as such and ended up as a Senior Instructor at the International Law Development Centre in Rome, Italy.

In between, he held the post of First Parliamentary Counsel and Constitutional Advisor to the Uganda Government, Director of the Commonwealth Secretariat Scheme for Legislative draftsmen for the West African Region, Southern Africa Region, the Caribbean Region and a Professor of Legislative drafting at the Cave Hill Campus, Barbados, University of West Indies.

He worked with Justice P.N. Bhagwati, a former Chief Justice of India and Justice Eso of the Supreme Court of Nigeria to advise on the setting up of the Constitutional Court in South Africa.