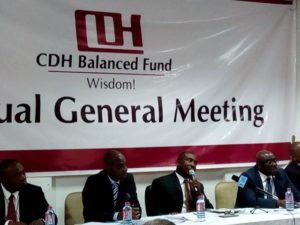 The Chairman of CDH Balanced Fund attributed the impressive performance to aggressive digital marketing and outreach efforts embarked by the Fund Manager.

“The Fund has been consistent on yearly basis and it continues to outperform the benchmark Treasury Bill and other investment vehicles, as well as the delivery yields above the rate of inflation,” he added.

On the Fund’s outlook for this year, Mr Adu-Sarkodee said the Board would continue to focus on the growth of the fund, explaining that, “We will continue to build shareholder value through an investment portfolio that is structured to ensure financial stability for the medium to long term…. This effort will be supported by dedicated research and brokerage services”.

Mr Seth Aryitey, the Fund Manager and Executive Director, CDH Asset Management Limited, told shareholders that the Fund, in line with its growth strategy, had expanded from investments in three equities in 2016, to 11 as at 2017.

Mr Aryitey said the Fund would continue to chart the course of delivering good returns to shareholders this year as the stock market continued to recover and post significant gains.

“We will continue to work hard to increase the number of shareholders and strengthen digital marketing strategy to reach the borders of the country,” Mr Aryitey stressed.

Shareholders at this year’s AGM received and adopted the Audited Statement of accounts for December 31, 2017. They also adopted the Directors, Auditors and Custodian’s Report.