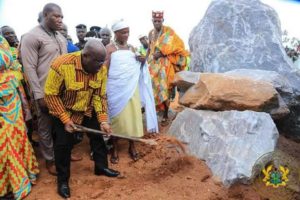 The President, Nana Addo Dankwa Akufo-Addo has assured security services of 40,000 housing units to relief them of accommodation issues in the discharge of their duties.

Issues of police accommodation has become a critical challenge with insufficient bungalows all over the country.

The President also indicated that many more men and women would be recruited into the service to beef up security, peace and tranquillity to ensure that all citizenry lived in a comfortable environment and carried out their activities without fear of attack.

Nana Akufo-Addo said this during a durbar of Chiefs and people of the Axim traditional area to climax this year’s Kuntum festival celebration, on the theme “Promoting Security in our communities, the role of the  society and traditional authorities ”

The teeming crowd, including; fishermen, fishmongers, traders,  NPP as well as traditional authorities graced the occasion amidst colourful display of cultural dance and  different types of kente cloths.

“My government is prepared to resource the security agencies to deliver on their mandate of state protection and soon 4,000 new police personnel would be recruited to help promote effective security and atmosphere of tranquillity both in the urban and countryside…we are also providing 1000 new vehicles and as I speak 200 are already working in the system”, the President added.

The President said soon massive rural telephony project would be undertaken under the Ghana Infrastructure Investment Fund (GIIF) to help open up rural communities, for ICT infrastructure and to enhance education, communication and businesses in the countryside.

The President who made reference to the recent electrification of four farming communities in the Gwira area in the Nzema East Municipality of the Western Region stressed that “we are bent on connecting more rural communities to the national grid”.

“These are all interventions to improve livelihoods among Ghanaians …Our next budget I am pretty sure will capture the fixing of the deplorable Gwira roads and other such roads in the Municipality.”

President Akufo-Addo admonished the constituents of Evalue-Ajomo-Gwira to continue to support the current government and the Member of Parliament (MP) for the area, Madam Catherine Afeku for massive development projects.

He encouraged the constituents to support the NPP government and the MP by renewing their mandate in the next general elections for projects advancement and economic growth.

In a related development, the Axim Sea Defence project, a long overdue investment to save lives and property would see the light of day as the President used the opportunity to unveil a plaque for work to begin on the seven- kilometre project.

The project which stretched from Brawire to Apewosika would protect the ancient coastal town in the Nzema East Municipality from the ravages of the sea and the Sea defence project was being undertaken by Mekam Plant Hire (MPH) led by its Chief Executive Officer, Atu Mould.

Mrs Catherine Afeku, the Minister for Tourism, Culture and Creative Arts and MP for the Area was grateful to the President for choosing an indigene of the area to be not just a Minister, but a cabinet Minister to spearhead the development in the area.

“Since 1960, we have not had a Minister in this part of the Nzema area and we are grateful to the President”, she noted.

On the status of the Axim Hospital, Madam Afeku said though the government plans to put up a modern facility, her outfit together with the Ministry of Health were working to upgrade the current facility.

Awulae Atibrukusu III, Paramount Chief of Lower Axim commended the President for the many social interventions including; the free senior high school to ensure that every Ghanaian child had access to quality education.

He pointed out that successive governments had failed to construct the Axim sea defence wall which caused lots of harm over the years and prayed that the project would be completed on schedule.