September 10, 2018 General News Comments Off on Minister leads Christians on pilgrimage to Israel 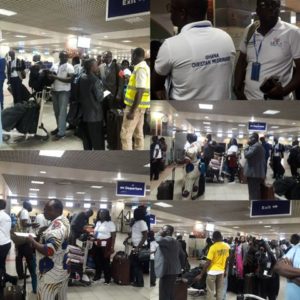 Mr Paul Essien, the Deputy Minister of Chieftaincy and Religious Affairs, is leading the first batch of 55 Christian pilgrims to the holy sites in Israel, with the aim of strengthening their faith.

The Israel Pilgrimage was the second after the Ministry successfully facilitated a maiden pilgrimage last year.

Mr Essien told the Ghana News Agency, in a pre-departure interview at the Kotoka International Airport that, the first batch of the pilgrims were expected to return on Sunday, September 16, after visiting the various historical sites identified in the Bible.

He said the second batch of 150 pilgrims would join later during the week, to be led by Mr Samuel Kofi Dzamesi, the Minister of Chieftaincy and Religious Affairs.

Mr Essien said the Ministry was committed to ensuring the mediation of religious bodies “to ensure that no one in particular infringed on the right of the other during the exercise of one’s faith” adding that, “we facilitate any activity of the religious bodies”.

In an interview with some of the pilgrims, Mr Abraham Aburam, a member of the Revival Restoration Assemblies of God in Accra said, as a first time visitor to the holy sites, he deemed it a significant initiative.

He said it was an opportunity for him to have a feel of what he had read in the Bible about the birth of Christ, where he walked and did miracles, adding that, “I am going to see all those places, have a feel and experience physically and spiritually. It is a great moment for me”.

Mr Aburam commended the government for the opportunity to see the holy sites in scriptures because “I have been praying to God for this opportunity and today here I am”.

Rev Canon Charles Lawrence Kwabena Amankwah, a Priest of the Anglican Church at Abetifi, in the Eastern Region, said it was fulfilling that he was visiting the holy sites in Israel because it will solidify the messages he had been preaching over the years with experiential and practical touch.

He said he wants to see Gethsemane, the Dead Sea, Jerusalem, the Tomb where Jesus was laid, among many other sites “I am eager to know what it is like and how it came by, so that in future when I am speaking, I will talk as a Pastor, who knows what he is talking about”.

He urged all Christians to take advantage of the opportunity the government was providing and visit the holy sites in Israel to strengthen their belief.

According to the Ministry, the fares for this year’s pilgrimage to Israel remains unchanged, same as the 2017 pilgrimage, at $2,700.00 per person.

In April, this year, government announced that it would facilitate the organisation of the second trip to Israel for Ghanaian Christians, following last year’s inaugural pilgrimage, which saw a little over 100 pilgrims making the trip.