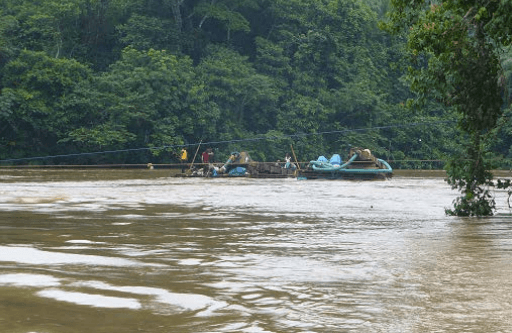 The bodies of all six persons, who got drowned on Thursday night after the vehicle on which they were on travelling was swept away by strong currents of the Ankonim River at Esereso Adagya in the Bosomtwe District, have been retrieved.

The deceased persons believed to be family members got drowned when the driver took a risk and drove through the flooded main road of the community, after a heavy downpour, but the vehicle was dragged into the river, which had overflowed its banks.

An eye witness, who pleaded anonymity told the Ghana News Agency that the bodies, including a 13 year old JHS student, got trapped in the vehicle and totally submerged in the flood waters.

The source said the Fire Service personnel came around but left, probably because there was no sign of the vehicle and where to locate it in the river.

The inhabitants of the town looking on helplessly, later caught a glimpse of the roof of the vehicle after the flood waters had receded and that enabled the youth of the area to muster courage to retrieve the vehicle.

The source said five bodies were initially found on Thursday evening, while the remains of the driver was also retrieved on Friday morning.

The deceased whose names have yet not been disclosed, according to the source, are members of the Jehovah Witnesses, who were constructing a new church (Kingdom Hall) in the community.

When contacted, Assistant Chief Fire Officer (ACFO), Joshua Nguah, the Ashanti Regional Commander of the Ghana national Fire Service confirmed the incident to the GNA but could not give details.

He said his outfit has started a preliminary investigations into the incident.