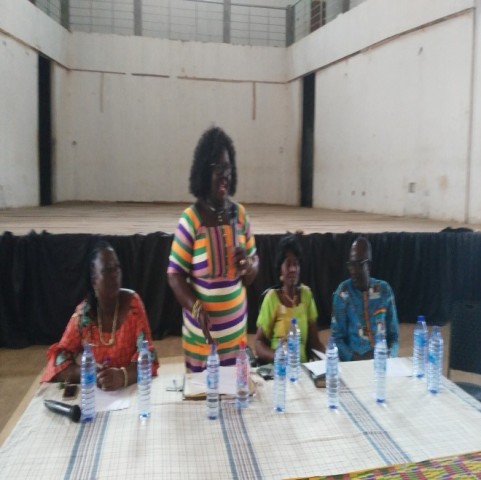 The National Commission on Culture (NCC) on Monday directed all Metropolitan, Municipal and District Assemblies (MMDAs) to set up Cultural Advisory Boards, as required by the National Culture Policy.

The Board, according to Madam Janet Edna Nyame, the Executive Director of the Commission, would collaborate with and support the various offices of the Centre for National Culture (CNC) to initiate and implement programmes that would promote and deepen the country’s culture.

Interacting with District and Municipal cultural officers and staff of the CNC in Sunyani, as part her two-day working visit in the Brong-Ahafo Region, Madam Nyame said national development would not thrive as expected if Ghana’s cultural heritage remained in the dark.

She said the District and Municipal Officers of the CNC played critical role in highlighting and showcasing the country’s rich culture, but added that the District Officers needed the support of traditional authorities and District Assemblies to function effectively.

Madam Nyame said it is the objective of the Commission to ensure growth and development of cultural institutions and make them relevant to human development to enhance Ghanaian cultural life.

She said the NCC was aware of the numerous challenges that hindered ability of the staff of the CNCs to perform but such challenges should not deter them to do their best as “these challenges are everywhere in the civil and public service.

“We should try to be innovative and creative to bring new ideas on board, things that help to promote our culture in our Regions and Districts”, she said.

Madam Nyame said the Commission was collaborating with the University of Cape Coast to introduce certificate programme on Culture and Arts to enable staff to upgrade themselves and help change the scheme of service of the CNC.

She advised the District and Municipal Cultural Officers to collaborate with each other, promote team work and innovate creative ideas that would promote the culture of the people.

Madam Nyame said the District and Municipal Officers of the CNC has the right to seek for funding to implement cultural programmes and urged them to always inform the Regional Offices of such moves.

Mrs Bernice Deh-Kumah, a Deputy Director of Programmes, who accompanied the Executive Director, advised the District and Municipal Cultural Officers to strive hard to indentify, organise and mobilize various artistic resources in their areas and help develop the commercial potentials of such resources.

Madam Helen Sanabi Akanyong, the Brong-Ahafo Regional Director of the CNC, said the visit of the Executive Director was appropriate and this would inform all their deliberations.