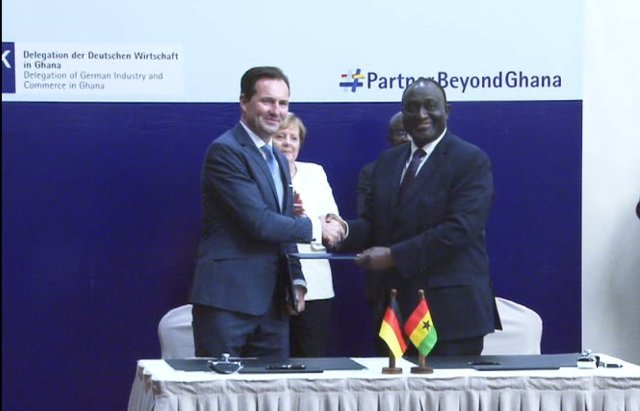 The Ministry of Trade and Industry has signed a Memorandum of Understanding (MoU) with a German automobile company, Volswagen, to build an automotive assembly plant in Ghana.

The MoU, which was signed between Volswagen and the Ministry at the Business Dialogue in Accra on Thursday, was facilitated by the Delegation of German Industry and Commerce.

In an address, Vice President Dr Mahamudu Bawumia said the inclusion of Ghana in the G20 initiative “Compact with Africa” under the German Presidency in 2017 was a real demonstration of Ghana’s desire to realise a “Ghana beyond Aid”.

He noted that the “Ghana beyond Aid” was aimed at ensuring private sector participation to engender investment and trade.

To attain that vision, he said the government had embarked on various public sector reforms to create a conducive environment for the private sector to thrive.

Upon assumption of office about 18 months ago, he said the government had instituted key fundamental pillars to anchor the “Ghana beyond Aid”, noting that, it had stabilized the macro economy by reducing the inflation to a single digit, fiscal deficit from 9.3 to 5.9 per cent and interest rate, whilst the economic growth had increased from 3.6 per cent in 2016 to 8. 5 at the end of 2017, and all the fiscal indicators were moving to the right direction.

Vice President Bawumia gave the assurance that, government would ensure fiscal disciple to sustain the gains made thus far.

Touching on some policies to formalize the economy, he said government had implemented the national property digital addressing system, ongoing national identification system, mobile money interoperability payment system, smart driver licensing and registration regime and paperless ports system, while efforts were underway to digitize the lands Registry so that all lands records could be accessed digitally, to ensure transparency and efficiency.

Implementation of those programmes, he said, would create the basis for a credible credit reference system and enabled financial institutions to offer loans to businesses and individuals with low interest rate, which would bolster the economy.

Vice President Bawumia noted that government was creating the avenue for industries to add value to the raw materials through agro processing and believed that the country was at the cusp of modernising the economy to engender growth.

He expressed optimism that the MOUs signed would be actualized in not distance future to enhance the economic fortunes of the nation and to create jobs for the teeming unemployed youth.