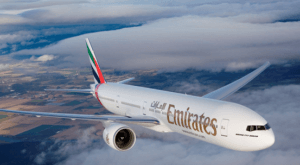 Emirates Airlines on Thursday said while it is not immediately introducing a larger aircraft onto its Accra-Dubai route, it is open to explore options for expansion as the route continues to grow, either with additional flights or with larger aircraft.

The airline had announced that it will operate a one-off flight of the iconic Airbus A380 on October 2nd, 2018 in commemoration of the opening of the Terminal three (T3) at the Kotoka International Airport in Accra.

Ms. Cathy Wesley, Emirates Country Manager for Ghana told the media in a roundtable interaction that the airline was currently doing very well in Ghana, operating daily flights out of the KIA, having started out in 2004 with three flights a week.

She said even though the airline did not have immediate plans to introduce a larger aircraft than its current Boeing 777, it was open to exploring that opportunity in the future.

“Growth is exceptional; we are really experiencing growth out of Ghana and for future purposes, there is always the opportunity to be looking at additional aircrafts or aircraft types into Ghana,” she said.

Emirates, currently operates a Boeing 777 in a three-class configuration on the Accra-Dubai route: 310 seats in economy class, 42 seats in business and eight in first class.

She explained that the A380 flight was being organised in collaboration with the Ghana Airports Company Limited to test the capacity of the new terminal to handle large aircrafts like the A380 and for Emirates’ future growth.

Ms. Wesley said news of the A380 flight had attracted huge interest so far, with many people wanting to see the aircraft.

The airline had thus, launched special fares that passengers could book until September 10, 2018.

The promotion would allow passengers who are interested, to book seats on the A380 to or from Ghana on October 2. Fares from Dubai starts from $655.00 for economy class.

Ms. Wesley said the Emirates continued to be committed to the Ghanaian market, employing over 100 Ghanaians, 68 of them cabin crew…“the importance of our partnership with Ghana will never ever dwindle”.