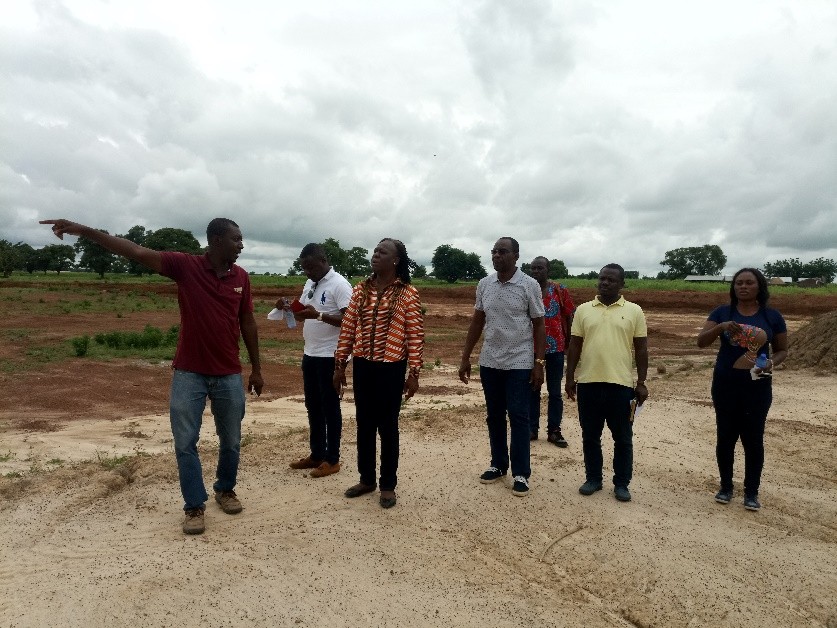 The Public Interest and Accountability Committee (PIAC) has inspected ongoing irrigation works on the Tamne irrigation project site in the Garu District as part of its facts finding working visit mission in the Upper East Region.
Mr Andy Alalbila, the Regional Engineer of the Ghana Irrigation Development Authority (GIDA) who took the team round and showed the extend of work done on the dam, said it was a two-year project, which started in July 2016 and was expected to end in July this year. However, it was extended to December 2018.
He said there were several reasons for the extension of work, and indicated that some households along the dam area needed to be relocated and compensated while talks in that regard was still ongoing.
Mr Alalbila disclosed that work for phase one was 75 percent complete, and said the main scope of work, which were the key trench, embankment, spillway channels, in-let and out-let structures were still under construction.
“For now, they are excavating the spillway channel, after which they will do the concrete works. We also have the upstream slope lining and they are supposed to do siphon work at the spillway,” the Engineer said.
Mr Alalbila explained that siphon would transport water across the spillway channel, and said for now, the constructors had left a gap on the embankment to allow runoff water to flow through, and would close it during the dry season.
He said the entire dam wall and spillway was about 1,380 metres while the spillway alone was about 80 metres.
The Engineer said the second phase was the development of the irrigation network and “They are supposed to construct the left and right gravity canals and laterals. The ongoing work is hauling of boulders and chippings from the quarry to the dam site,” he added.
In an interview with the Ghana News Agency (GNA), after inspecting the project, Dr Thomas Kojo Stephens, Vice Chairman of PIAC said the Annual Budget Funding Amount (ABFA) allocated from the petroleum revenue for the project was GHc 20,731,591.20.
He said with the progress of work done so far, it did not appear the project would be completed by December this year and indicated that it was premature to make assessment in terms of monies disbursed.
“It is a project that we would have to come back after completion to assess if there was value for money.”
According to Dr Stephens, PIAC observed that officials at the project sites visited in the region could not give first-hand information on works done so far and monies expended and said the team procured some documents from the regional office of GIDA.
“We will do further inquiries at the head office in Accra and compare it to the information that we have including information provided to us by the Ministry of Finance.”
He said it was important for government to involve the District Assemblies and communities in the oil funded projects because during PIAC’s stakeholder engagements, especially in the Bongo District, it was realized that stakeholders were unaware of oil funded projects in the District.
Dr Stephens cited for example that rehabilitation of irrigation dam at Balungu in the Bongo District was awarded on November 29, 2008, the original contract duration was for six months, with original sum of GHc 360,054.75, and total amount certified GHc 324,049.28. ABFA allocated GHc 119,798 disbursed in 2014, and was supposed to be 100 percent complete, however, during a public forum at Garu, some stakeholders said the last time work was done on the dam was 2008.
Source: GNA