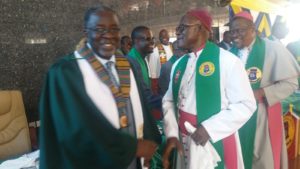 A colourful valedictory and superannuation service has been held for the Right Reverend Colonel Paul Adjei Brewu (RTD) at the Sakumono Mount Zion Methodist Church on Sunday.

He served as the Diocesan Bishop of the Akim Diocese and Superintendent Minister of the Tema West Circuit, Sakumono of the Methodist Church, Ghana.

Bishop Brewu was also seconded to the Ghana Armed Forces (GAF) as Chaplain serving at the Ghana Military Academy and various military barracks across the country, and later became the Chaplain General of the GAF, thereby propagating the gospel of Christ for 52 years.

Preaching the sermon on the theme: “The Importance of the Lord’s Supper”, Bishop Brewu entreated Christians to have Jesus Christ as the living bread who could rescue them from spiritual bondage and offer them eternal peace and salvation.

He said the world had become corrupt with people losing their integrity, and cited instances where some assembly members, who tag themselves as “honourable members” sometimes take bribe from persons nominated by the President as district chief executive for a particular district before approving them.

He condemned such practice, which had gained root in the country’s partisan-politics and called for its cessation.

“I have never exploited my congregation throughout my 52 years in active Ministry”, he said, and entreated other Men of God to do same, in order to accomplish God’s purpose for calling them.

Bishop Brewu said life is about Jesus Christ, and not about glorifying one’s self in politics and worldly material things.

He provided true-life experiences to demonstrate how believers could trust God for a successful and righteous living.

Bishop Brewu expressed profound appreciation to all pastors, deacons and deacons as well as the entire membership of the church, who in one way or the other made his calling to the service of God successful.

He prayed for God’s manifold blessings and guidance for them, saying; “I will miss you dearly”.

All the fraternal messages that came from pastors and societies he served acknowledged his life-changing messages, steadfastness in prayer, resilience, disciplinary nature and commitment to the mission of God.

The Right Reverend Thomas Forson, Tema West Circuit Diocesan Bishop of the Methodist Church, Ghana, in a brief remarks, said the outgoing Superintendent Minister was his mate at the Trinity College and both completed successful in 1983, noting that, he had followed his Ministry work keenly and realised that the Bishop Brewu availed himself for God to use him mightily to win souls for His kingdom.

He asked for God’s continuous guidance as he retired from active Ministry, saying; Bishop Brewu has been supportive during his four-year stay in the Tema West Circuit of Methodist Church”.