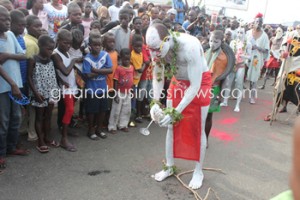 The Ministry of Tourism, Arts and Culture has announced plans to support this year’s ‘Chale Wote’ Street Arts Festival with GH¢300, 000 slated for August 25-26.

The Ministry, would also provide security to safeguard the safety of patrons at the event since over 30,000 people patronised the event last year, which projected the country’s creative arts potentials positively to the global audience.

“We’re giving them financial support, publicity and the Ministry’s ambit because it’s one of the major festivals for young people to showcase their visual and creative arts skills and increase the package to one million Ghana Cedis,”Madam Afeku disclosed.

The Festival, is an alternative platform that brings art, music, design, dance and performance out into the streets.

The community-based festival takes place in James Town, one of Accra’s most historic communities and targets exchanges between Ghana-based and international artists creating and appreciating art together, she said.

Over the last eight years, it had transformed the City of Accra into the most active cultural hub in the West Africa Sub-region and inspired possibilities in public space design through community supported cultural production.

The Minister said another paragliding festival would also be organised in December this year at Kwahu aside the one held annually in September considering the high patronage the festival have enjoyed over the years, so that more people would have the chance to enjoy the flight in parachutes.

Madam Afeku outlined a number of activities the Ministry had instituted to project the creative arts and entertainment industry from August to November this year.

She mentioned the Black Star International Film Festival (BSIFF), which started on August 11, and would end on Saturday, August 18, with ongoing activities such as film screening, workshops and panel discussions.

She noted that BSIFF is a non-profit organisation creating global connections through film and helping to bridge the gap between African cinema and the world.

It is a festival focused on the business of film and advocacy in the region. Its goal is to create a platform where filmmakers can learn, network, do business and celebrate their craft within an African context.

The Minister also mentioned the hosting of the African Tourism Leadership Forum slated for August 30-31 in Accra, with six African ministers confirming their participation.

The Minister added that Ghana would also host this year’s All Africa Music Awards (AFRIMA) from November 14-17, which is being organised by the Government of Ghana in collaboration with the African Union and AFRIMA Secretariat.

AFRIMA is designed to promote the distinct rich African music worldwide, engaging millions of fans by propelling African music to glorious pinnacles beyond the borders of Africa.

The Minister said the unveiling of AFRIMA celebration was done in May, this year, noting that, Ghana had been given the hosting rights for the next three years.

She said representative of arts and entertainment industry from 54 African countries are expected to perform at the ceremony.

She said a number of music concerts would be held in some African countries as prelude to the actual music awards ceremony in Accra, noting that, the music concert planned to take place at the Independence Square is expected to attract over 100,000 audience.

She said business summit on entertainment and creative arts industry would also be organised, while an awards night would climax the celebration.

According to her, the activities of AFRIMA would be shown on Dstv, which would attract over 80 million viewership worldwide and expose the country tourism potentials to global audience.