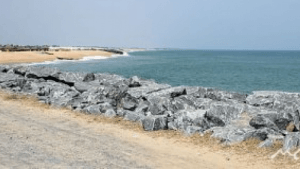 Ghana and Cote d’Ivoire has agreed on the maritime boundary as defined by the ruling of the Special Chamber of the international Tribunal for the Law of the Sea (ITLOS) last year.

Using the coordinate submitted by Cote d’Ivoire, the technical committee of the two countries at the second joint committee successfully plotted the seven coordinates and had determined the maritime boundary as outlined by ITLOS.

As an indication of their agreement, Mr Yaw Osafo-Maafo leader of Ghana’s delegation and Mr Adama Toungara, leader of the Cote d’Ivoire team signed a communiqué on behalf of their respective countries.

Mr Osafo-Maafo, briefing the media at the end of the two-day meeting in Accra, noted that, during the meeting Ghana reviewed the chart with the plotted coordinates of the maritime boundary as provided by ITLOS submitted by Cote d’lvoire at the May 2018 meeting in Abidjan and found it to be acceptable in principle.

He explained that the parties jointly plotted the seven coordinates and azimuth in accordance with the ITLOS decision and had agreed to execute a document evidencing the plotted maritime boundary at the next meeting scheduled for October 2018 in Cote d’lvoire.

Mr Osafo-Maafo said the two countries had agreed to discuss the draft Framework Agreement on cooperation in the areas of maritime boundary, hydrocarbons and other natural resources between the two countries at the next meeting.

The just ended meeting follows an earlier meeting held in May 2018 at Abidjan, where, Côte d’Ivoire shared with Ghana a document on the plotting of the coordinates in accordance with the ITLOS decision of the maritime boundary between the two countries on a nautical chart at a scale of 1:1 million.

It will be recalled that a protracted maritime dispute between Ghana and Cote d’Ivoire was settled on September 23, 2017 when the ITLOS ruled that Ghana had not violated the sovereign rights nor trespassed into the marine boundary of Cote d’Ivoire with its oil exploration in the Western Region of Ghana.