Pupils in Garu and Tempane learn on bare ground 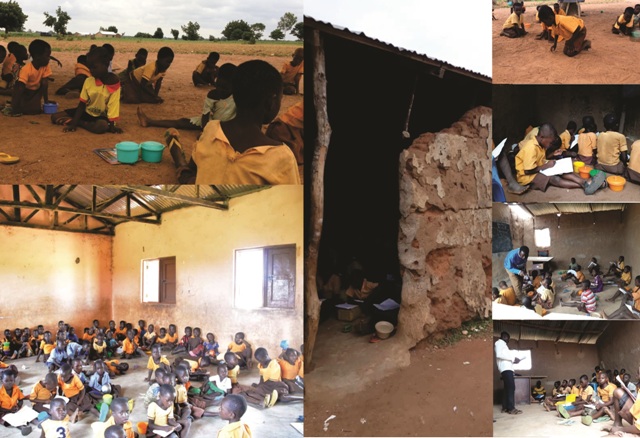 For the over six academic years of kindergarten (KG) and primary education at Teong, a community in the Garu-Tempani district of the Upper East Region of Ghana, Ms Vida Aputoi, sat on the bare ground to receive tuition.

The eloquent young teenagerS did not also have access to write on a slate or any form of writing materials at KG as she had to contend with practising how to inscribe the alphabets and numerals with her right fingers on the bare creamy sandy ground.

Vida says, the situation has not changed too much, because even after transiting from taking lessons under a tree at KG, to primary one and two, she still sits on the ground of a makeshift mud classroom.

The facility, built over 10 years ago through a community-initiated effort, is a death-trap, as there are visible deep cracks on the walls and portions of the cement coat  are worn-off. Many of the pillars supporting the structure are also loose and dangling.

She and her peers have to go through the ritual of washing their school uniforms every day because their classroom is dusty. She describes the situation as sad and demotivating.

“Because there is no desk to sit on, sometimes I do not feel like attending classes. We need help to be able to achieve our aspirations,” she pleads.

The real-life story of Vida is not an isolated case because about 18,357 in the 132 KG and primary schools in the district do not have furniture and this impedes effective teaching and learning. There are many of such cases dotted around rural areas in Ghana especially in the Northern, Upper and Upper West regions.

Ghana has signed up to the UNICEF Convention on the right of the child, which mandate governments to ensure that all children enjoy the right to free primary education.

Mr Andrew Ofosu-Denkyi, Education Technical Programme Manager, World Vision International, Ghana notes that the government needs to appreciate this dire situation and help bridge the educational infrastructural inequality. He thinks the cause of the deplorable conditions is the lack of accountability at the school level.

“School management sometimes is just irresponsible and manage school infrastructure anyhow. Issues that can be dealt with quickly are left to deteriorate and no one holds school heads accountable to resources left in their care,” he said.

Madam She-Vera Anzagira, a development practitioner, reminds government to keep the pledges they recently made at the Global Partnership for Education Financing Conference held in February 2018 to ensure that all children are able to fully enjoy their right to a good quality education.

Mr Edward Azure, District Director of Education of the area remarks that some Headteachers in their quest to improve the deplorable conditions construct benches and provide mats for the kids to sit on to learn. In some cases, children go to school with stools in place of the appropriate furniture.

He said of 9,843 KG pupils in the districts only 2,895 pupils had seats as about 6,948 sit on the floor to receive instruction. Also of the entire KG population, less than half of the pupils had places to write the rest of the majority totaling 6,670 had no writing places.

Asked about the state at the Junior High level, he noted that due to church activities in some of the schools, the students used the church pews for studies.

One other problem bedeviling the districts, located in the South Eastern part of the Upper East Region, is lack of school buildings, especially for pre-school and lower primary.

Mr Azure explained that, most of the schools had only three classrooms for the entire school, thus from kindergarten one to primary six. Some of the three classrooms were temporal and makeshift structures that were either dilapidated or collapsing.

Mr Martin Kwasi Torbizo, an Information and Communication Technology Officer at the Garu GES, narrated that aside from the infrastructural deficit, Teaching and learning materials were inadequate in many schools.

“There is no school I have visited that does not lack core textbooks, readers, pencils and exercise books. This situation affect effective lesson delivery in the classroom. Head Teachers at times have to buy learning materials like pencils and exercise books for pupils. Due to lack of storerooms or offices for some schools, storage of these materials becomes a challenge,” he states.

Mr. Torbizo says Teacher absenteeism has improved due to the introduction of Mobile School Report Card (mSRC), an online database system that is used to track the attendance of teachers. The system also acts as a management tool to collect relevant information concerning pupils and teachers.

According to the officer, the mSRC; an initiative by UNICEF Ghana, has enhanced monitoring and evaluation, improved general supervision of teaching and learning by Circuit Supervisors, as they do not have to physically visit the schools for inspection.

The District Director said the results of the Basic Education Certificate Examination (BECE) in the District had not been desirable for the past five years, noting that the district had not in any single year recorded a percentage above 50 per cent.

He attributed the abysmal performance to poor foundation and preparation from primary school, lack of classrooms, furniture, and students’ inability to read.

Response of the District Chief Executive

Mr Emmanuel Asore Avaka, District Chief Executive (DCE) of Garu, in an interview with the Ghana News Agency recently admitted that the inadequate logistics, especially furniture, was one of the factors that accounted for the poor performance of the pupils at the Basic Education Certificate Examination.

The DCE says, through his ingenuity and lobbying skills about 2,000 dual desks had been received from Mr Joseph Kpemka, Member of Parliament of the area and other friends and sent to the education directorate for onward distribution.

“As a former teacher, a father, and a representative of the government, I feel sad about the plight of the school children …the current story where the district constantly placed last in the Basic Education Certificate Examination in the Upper East is sad,” he said.

While acknowledging that the gravity of challenge was enormous, the DCE appealed to all organizations and individuals to support the children to get decent desks to be able to study.