Kufuor calls for economic masterplan for Tarkwa and environs 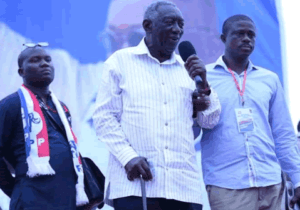 Former President Mr John Agyekum Kufuor, has advocated a far-reaching economic masterplan to be drawn for Tarkwa and its environs.

He said this would ensure a robust and sustainable local economy for now and the near future.

According to him, there is no doubt that the economy of Tarkwa was basically grounded on minerals production.

The first Chancellor of the UMaT who said this during the 10th congregation of the University in Tarkwa, stressed that the mineral resources were non-renewable and it would eventually be depleted.

He pointed out that the masterplan must be undertaken by a strategic partnership of the Municipal Assembly, the University, traditional authorities and the National Development Planning Commission teaming up with the local mining industry.

Such a collaboration he said would engender a symbolic relationship among the partners to the general benefit of the stakeholders and the nation as a whole.

“Examples abound around the world in localities such as the Research Triangle area of North Carolina; Boston, Massachusetts; and Austin, Texas, all in the USA, where the collaboration among the relevant stakeholders has produced booming high-tech economic hubs,” He noted.

The Ex-President indicated that such a plan would also take care of the post-mining economy of the area.

According to him other examples of such post-mining planned developments in the world included the cities of Newcastle-upon-Tyne in Britain, Johannesburg in South Africa and Boulder, Colorado in the USA, where the strategic establishment of a university underpinned a continued economic sustenance to the people in and around those cities.

“In this regard, to benefit Tarkwa and its surrounding communities with a sustainable economic base, the government should urgently consider a well-planned and expanded UMaT as an answer to, among other things, post-mineral extraction at Tarkwa and its environs”

The Ex-President added that during his investiture as the Chancellor for UMaT, he requested the University to strive to become the MIT of Africa.

Mr Kufuor explained that this responsibility cannot be discharged successfully without availing the University with adequate and sustained funding and resources.

He said given the specialized nature of the University, it was well-positioned to produce the requisite human resources to drive the envisioned industrialized of the national economy.

The Ex-President further emphasized the need for the government and the private sector to urgently rally to offer the much-needed support to the University.

“It has all the makings to become an institutional anchor of success for the laudable government agenda of “Ghana Beyond Aid,” “he said.

He urged the government through the Ministry of Education to as a matter of urgency, get Parliament to timely approve the 2018/2019 academic year fees.

This, he said, would enable universities to seamlessly fulfil all their obligation in order to continue with their mandate of teaching, research and extension services and for the smooth running of the 2018/2019 academic year.

Ghanaians are shifting from cheques to more digital payments – Report