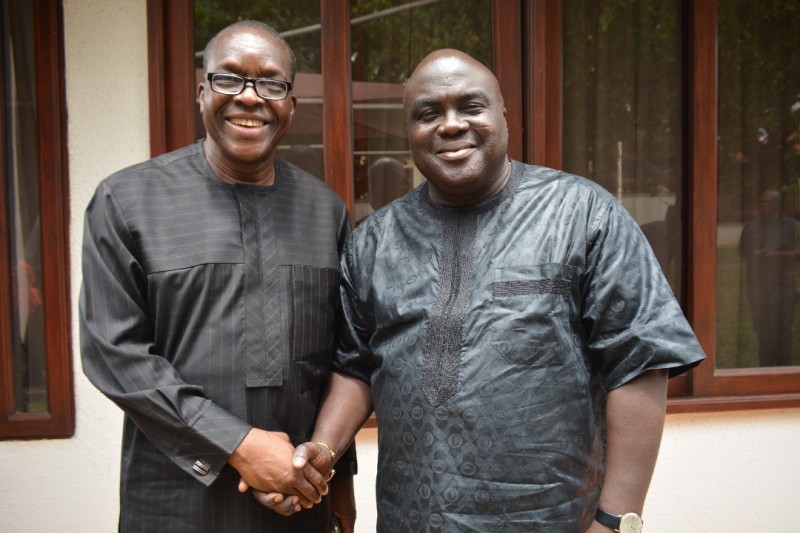 “Mr Alban Bagbin is a great leader; he is a man who seldom talks, but when he does, he speaks the unpalatable truth,” the former Chief of Staff said when Mr Bagbin visited him on Thursday to commiserate with him on the death of his mother few weeks ago.

The former Chief of Staff praised Mr Bagbin, who is a leading flagbearer hopeful of the NDC, as a man who belongs among the greats.

Madam Kate Pokua passed on the 15th of July at the age of 73 after battling a short illness and her passing has since invoked an outpouring of condolences to the former Chief of Staff.

Mr Bagbin, who went there to mourn with him as tradition demands, was warmly received together with an entourage that included; Mr Joseph Naabu Bipoba, the MP for Yunyoo, and Mr Raymond Kuudaah, General Manager of Mr Bagbin’s Flagbearership campaign Secretariat.

Other notables were; Mr Emmanuel Wilson, Communication Director for Bagbin’s Campaign team and Mr Stephen Ashitey Adjei, alias Moshake, a delegate and executive member of the Tema East branch of the NDC.

Mr Julius Debrah, who led his family to receive Mr Bagbin and his team said he regarded the respected MP for Nadowli-Kaleo as an elder brother and a long time source of inspiration.

“I consulted him a lot when I was Chief of Staff, because he is like an elder brother to me. This is the man who encouraged me a lot when I was in the Eastern region, rallied a lot of support for me and pushed for my elevation within the party,” Mr. Debrah said.

Mr Bagbin who confirmed the warm relations assured Mr Debrah of his support in his time of bereavement and donated some cartons of water towards the funeral rites of the former Chief of Staff’s late mother.

Prior to the call on Mr. Julius Debrah and his family, Mr Alban Bagbin and his team visited the Conference Centre in Accra to file past the mortal remains of late former Vice President, Paa Kwesi Bekoe Amissah-Arthur.

Mr Bagbin also joined the leadership and members of Parliament to call at the East Legon home of late Statesman, Mr. JH Mensah, to commiserate with his bereaved family as well.