July 27, 2018 Africa/International Comments Off on US government policy said to deny care to women, threaten progress in HIV response 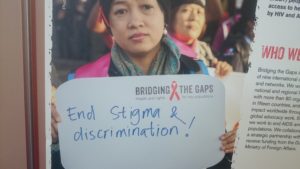 The global AIDS community meeting in Amsterdam, The Netherlands has cited a US government policy as being harmful to women and a threat to the HIV response.

Researchers made a presentation at the 22nd AIDS Conference showing what they described as “alarming evidence of negative impacts of the US government’s ‘Mexico City Policy’, also known as the ‘global gag rule’.

Speaking at the Conference, US Representative, Barbara Lee of California’s 13th Congressional District said: “The Trump-Pence Global Gag Rule is an ideological crusade that denies lifesaving care to women around the world and threatens decades of progress in the global HIV response,” she said, adding that, “The health care of women and children shouldn’t be used as a pawn to placate right-wing extremists.”

The rule was first introduced by President Ronald Reagan and reinstated last year by President Donald Trump. The policy denies US aid to organizations that provide information, referrals or services related to legal abortion or advocate for abortion, even with their own money.

A press release from the organisers says past iterations of the policy applied solely to US family planning assistance.

“Now, under the Trump Administration, it applies to almost all US global health bilateral assistance, including the President’s Emergency Plan for AIDS Relief (PEPFAR),” it said.

“The reach of the global gag rule has been greatly expanded, and has the potential to roll back progress on HIV,” Anton Pozniak, President-Elect of the International AIDS Society and Executive Director of HIV research and Director of HIV services, Chelsea and Westminster Hospital in the United Kingdom, said.

“The evidence is clear: we need better integration of sexual and reproductive health and HIV services, not policies that make it harder for people to access healthcare,” he added.

The AIDS Conference is being attended by 15,000 delegates made up of researchers, medical practitioners, activists, persons living with HIV and governments from around the world.

By Emmanuel K. Dogbevi, in Amsterdam, The Netherlands
Copyright ©2018 by Creative Imaginations Publicity
All rights reserved. This report or any portion thereof may not be reproduced or used in any manner whatsoever without the express written permission of the publisher except for the use of brief quotations in reviews.