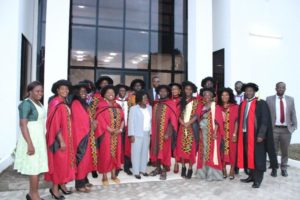 The West Africa Centre for Crop Improvement (WACCI), University of Ghana, has boosted the Alliance for a Green Revolution in Africa’s (AGRA’s) vision of a food secured Africa, by churning out 14 PhD plant breeders.

The graduation, which is the last batch of WACCI trained PhD students is funded by the AGRA,forms part of the University of Ghana’s 2018 graduation.

Of these 14 students, six were funded by AGRA.

Professor Eric Y. Danquah, the Founding Director, WACCI, in an interview with Ghana News Agency (GNA) on the sidelines of the graduation ceremony, said the Centre was evolving into an Agriculture Innovations and Entrepreneurship institution to generate game-changing products needed for the inclusive transformation of African agriculture.

He said to that effect, a multipurpose building to be completed in August 2018 would provide world class research, teaching and learning facilities to attract strategic partners from around the world to make WACCI a pre-eminent global institution for world class agricultural research and training.

Prof Danquah urged African governments and development partners to prioritise agricultural research institutions like WACCI for sustained core funding if they were desirous to transform agriculture in Africa for agribusinesses.

He noted that a hybrid maize breeding programme established by WACCI in 2009 with funding from AGRA had led to the development and release of superior maize hybrids (yielding between 9 – 11 t/ha).

“These hybrids are being commercialised in partnership with a local seed company, Legacy Crop Improvement Centre and are expected to be in farmers’ fields in the next year and would significantly increase maize productivity in Ghana and, therefore, contribute significantly to the National Agenda ‘Planting for Food and Jobs (PFAJ)’ of Ghana, a country which had to import maize seed from neighbouring Burkina Faso to keep-start its PFJ initiative,” he stated.

He said over 60 improved varieties of staples such as maize, sweet potato, rice, cassava, groundnut, cowpea and taro with the potential of increasing Africa’s food production had been released by WACCI graduates in their respective home countries.

“The promotion and adoption of these crop varieties by farmers will increase productivity and improve livelihoods in Africa,” he said.

He said the game-changing products were expected to end food and nutrition insecurity in many communities throughout the sub region as well as lift millions out of poverty in the decade ahead.

Prof Danquah said WACCI was exerting huge impact across the African sub-region and had shown in 11 years that quality plant breeding education was a smart development investment through strengthening capacity in the National Research Institutes (NARIs) across the sub-region with the critical mass of scientists churned out of the WACCI programme.

He said the Centre continued to produce the much needed human resources to fight food and nutrition insecurity across sub-Saharan Africa.

Dr Rufaro Madakadze, AGRA Programme Officer in-charge of Capacity Building, in a message to the graduands, said: “WACCI has been instrumental in resourcing West Africa with brilliant, practical breeders with the ability to work with both public and private sector with some countries like Ghana and Mali having doubled the NARs public sector breeders.”

“The vision and passion for these breeders speak to the excellent training they received from WACCI. AGRA is very proud of these scientists and expects block buster varieties from their work that transform their home countries agriculture,” she added.

Dr Dorothy Anima Effa, Programme Officer, Advocacy and Policy, AGRA Ghana, told the GNA that as the AGRA support programme for WACCI ends, they would still be working with WACCI, but in a reduced capacity.

She said AGRA’s focus would now be funding the lower level of capacity close to the farmers, thereby ensuring that products of research institutions get to farmers and urged the graduates to bring to use the knowledge gained at WACCI.

WACCI was established as a partnership between the University of Ghana and Cornell University in 2007 with initial funding from the AGRA to train plant breeders in Africa, who would be game changers in the transformation of agriculture in the West and Central Africa sub-region for food and nutrition security.

WACCI now one of the World Bank Africa Centres of Excellence has grown to become the pre-eminent Centre for plant breeding education in Africa and has more than doubled initial investments of $11.2 million from AGRA to over $28 million and exceeded the expectations of AGRA in terms of sustainability.

The Centre has since inception, enrolled 114 PhD students in Plant Breeding and 36 students in Master of Philosophy (MPhil) Seed Science and Technology.

A total of 66 PhD and eight MPhil students have graduated from the WACCI programme.

Of the 66 PhDs, 52 were funded by AGRA and many are leading plant breeding programmes aimed at increasing the productivity of the staple crops at the National Agricultural Research Institutes (NARIs) in their countries.