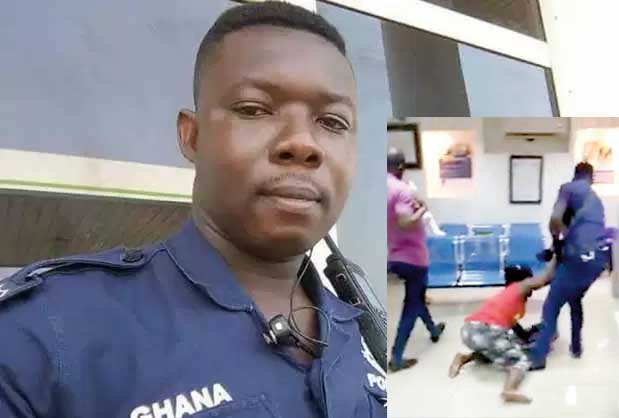 The Trades Union Congress (TUC) has condemned the act of brutality meted out to a nursing mother at the Shiashie branch of Midland Savings and Loans Company.

The TUC said it was unhappy about how the security personnel mishandled the victim, Madam Patience Osafo and therefore called on the law enforcement agency to ensure that the man involved in the incidence was brought to book as a matter of urgency.

Speaking in an interview with the Ghana News Agency on Friday evening, Mr Joshua Ansah, the Deputy Secretary General of the TUC said: “I condemn the act”adding that the authorities should let the Policeman face the law.

He should not only be apprehended, but to be made to face the law for the damages caused the woman and the baby.

He called on the authorities to ensure that the woman in question went to the hospital to do the necessary medical tests and ensure that she was mentally sound and free from the brutality meted out to her.

“The woman must be made to see to a psychologist and that she should be counselled to calm her nerves down and she needs to be fully compensated for the damages she had suffered from the armed police personnel.”

He suggested that the branch should be closed down immediately to prevent other customers from falling prey to similar situations if management cherished the lives of other vulnerable citizenry.

On Friday, there was a public outcry on social media after a video of an armed police officer brutalising a lactating mother went viral.

The video clearly showed how the policeman identified by the Ghana Police Service as Godzi Frederick Amanor, hitting the woman on her head with an umbrella and further punching her in the face.

It later emerged that the incident happened at the Shiashie branch of Midland Savings and Loans in the capital city, Accra, where the Police Service has since arrested the personnel and the processes of criminal charges commenced.

The Mindland Savings and Loans had also apologised to the customer, who was recorded being brutalised by the Police Officer.

The Company also confirmed that the incident took place at the said branch and also condemned the brutality meted out to the customer.