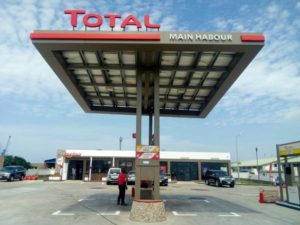 Total Ghana Limited on Friday, commissioned its first solar-powered service station in the country with a 35 kilowatt capacity, at the Tema main harbour.

The solar-powered station has a total of 225m2 solar panels comprising of 165m2 on the station’s shop and restaurant building, and 60 m2 on the pump island canopy.

Mr Fanchini stated that it was his outfit’s goal to solarize at least 50 per cent of their network of 250 service stations within five years.

He indicated that the solar installation was in accordance with the company’s ambition of being the ‘responsible energy major’ as solar was now part of the modernization plan of Total Petroleum Ghana.

Dr Adam announced that the Ministry of Energy had commenced the implementation of the scaling-up Renewable Energy Program (SREP) with the objective of delivering over 55 mini-grids, 38,000 stanalone solar home systems and 15,000 net-metered solar-with-storage systems for homes and small-medium enterprise across the country.

Dr Adam added that the Ministry was accelerating the process of promoting the use of solar in public buildings and facilities to reduce their reliance on the national grid as well as improve the financial health of the utility companies.

“We are currently procuring 65k Wp solar to meet about 35-40 per cent of the Ministry’s total load and this would be extended to cover the other state institutions”.

Mr Kojo Jackson, Director, Human Resource and Administration, National Petroleum Authority (NPA) congratulated Total for being the first petroleum company to commission a solar service station in Ghana and urged them to maintain the high standards in their operations.

Mr Jackson expressed concern about the illegal fuel activities undertaken by some unscrupulous persons noting that the NPA was collaborating with the security agencies to deal ruthlessly with any person found culpable in the act.

He added that any licensed petroleum service provider found to be engaging in any illegality would have its operating license suspended or permanently revoked.