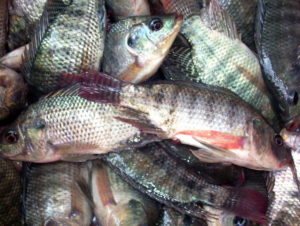 The Ghana Aquaculture Association (GAA), an umbrella body of aquaculture industry, says tilapia produced in the country is safe for consumption.

“We want to assure the fish eating public of this country that your locally produced Tilapia fish is healthy and absolutely safe to consume with no risk whatsoever to any body’s health.”

Mr Peter Angelo Habib, Executive Director, Government Relations, GAA, who said this at a News conference held in Accra on Friday explained that the Tilapia Lake Virus (TiLV) was not present in Ghana.

Mr Habib said: “There is no scientific evidence that the virus is transferable to human if they eat Tilapia fish.”

The News conference comes after the Ministry of Fisheries and Aquaculture Development (MOFAD) in a statement announced six month ban on the importation of Tilapia species and all ornamental fishes( Live or dead), including gametes-eggs and milt into the country.

This was as result of the newly emerging Tilapia Lake Virus (TiLV) cases reported across Africa, Asia and South America.

The Association although in support of the ban on foreign Tilapia importation, said government statement on the issue had caused a scare among the public and that had affected the sale of Tilapia in Ghana.

According to Mr Habib, the GAA had already taken measures to safeguard their farms and fish from the virus and other viruses to ensure that none of them surfaced in Ghana and explained that there was on-going awareness training for members of the Association on the need to embark on good husbandry practices on their farms.

Additionally, he said the Association in collaboration with the Fisheries Commission and Fish Health Experts would ensure that plans were put in place to tackle any sign of the virus before it took roots.

“We are actively working with the Fisheries Commission and other relevant government agencies to uphold government ban on the importation of foreign Tilapia onto the Ghanaian Market.’”

According to Dr Ziddah, officials of the Customs Division of the Ghana Revenue Authority had indicated that they could not make distinction between fishes with the virus hence the need to bring Health Fish Experts at the Ports.

He said there were kits available to aid testing in that direction.

Dr Ziddah said the GAA was currently producing 50,000 metric tonnes of fish in the country and there was no need to import more of the fish and government was also stocking dugs outs with fingerlings and that meant the Association could produce more fish.

Tilapia Lake Virus is associated with significant mortality in farmed fish and symptoms of infected fish including reddened skin, inflammation of organs and eyes and brain, liver damage leading to death and results in 80 to 90 per cent of deaths.