Accountability would improve when MMDCEs are elected – Dr Osae 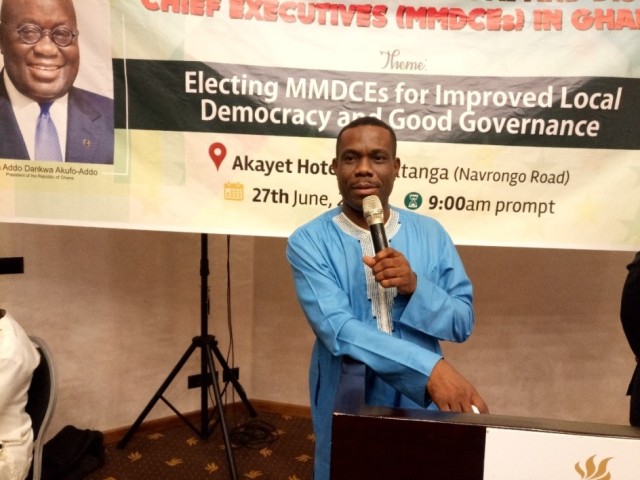 Dr Eric Oduro Osae, Dean of Studies and Research at the Institute of Local Government Studies, has said citizens at the local level could demand proper accountability if Metropolitan Municipal and District Chief Executives (MMDCEs) are elected.

He said one aspect of the decision-making process which prevented the citizenry from fully participating in governance was the failure to elect MMDCEs adding that it is the right of the citizens to seek accountability at the local government level.

He said “the guiding principle of our local government system requires that everybody is given the right to participate in decision making at every level of government.”
Dr Osae said this when he delivered a paper titled: “Election of MMDCEs on partisan basis; Rationale, processes and expected roles of stakeholders”, at a sensitization workshop organised by the Ministry of Local Government and Rural Development in Bolgatanga.

The nationwide programme afforded the stakeholders the opportunity to express concerns on government’s intention to initiate the election of MMDCEs at the local government level, and to deliberate on the pros and cons of the election of the MMDCEs.

Dr Osae said, “It is becoming extremely difficult if not impossible to exact total accountability from an appointed MMDCE. Article 245 of our 1992 constitution, gives local government various functions to perform, if you interpret and analyze the functions clearly, you would realize that these functions can best be performed by an elected leader”.

Dr Osae said if the Assembly’s Common Fund was not disbursed to the Assemblies on time or not disbursed at all; an appointed MMDCE would find it difficult to “make noise” even though they would need the money to develop the area.

He said “if you are elected, performing your function under Article 245 would be easy for you to mobilize resources because if the money is not coming, you would be bold enough to go to court to challenge the government to bring the money.”

Hajia Alima Mahama, Minister for Local Government and Rural Development, who opened the workshop, said the election of political leaders at the local government level is considered an international best practice adopted by many countries and aimed at deepening local democracy through popular participation in governance.

She said the move to have MMDCEs elected is in line with contemporary global best practice in local governance adding that “allowing citizens to popularly elect their own leaders in their various communities is long overdue.”
The Minister, who is also the Member of Parliament for Nalerigu-Gambaga Constituency, said the election of MMDCEs on partisan basis would make them more responsive and directly accountable to the people.

She said their security of tenure would be assured once they are elected “reduce exclusion and ‘winner takes-all’ syndrome and help deepen democracy”.

Mr Rockson Ayine Bukari, the Upper East Regional Minister, expressed gratitude to government for taking the step to realise a bold manifesto pledge adding that “the election of MMDCEs is without doubt a policy many support.”

He said many political leaders and governments have made the promise in the past, but lacked the will to execute it and the Nana Addo-led government is “charting another path for others to follow as we did with the repeal of the Criminal Libel law.”