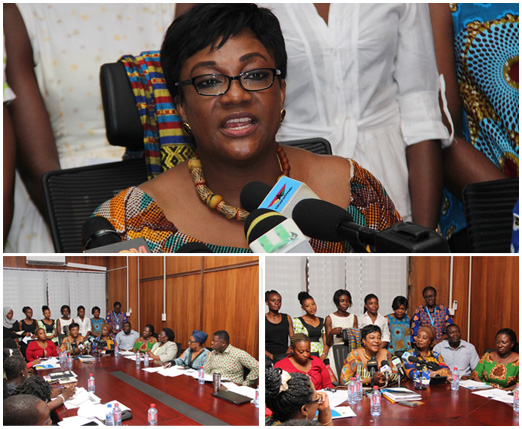 Ghana will from August 20-23, 2018, host First Ladies conference to discuss ways to end the menace of child marriages, Ms Otiko Afisa Djaba, the Minister of Gender, Children and Social protection, announced on Thursday.
The conference, to be held jointly with the Second Girls Summit, would also bring to bear girls role in knowing their sexual reproductive health as well as ending negative practices that affect them.

Speaking at a press conference in Accra, Ms Djaba said the conference would highlight the role of First Ladies in ending the menace and other negative and harmful traditional and cultural practices that affected the girl child.

On August, 20-21, 2018, there would be a Pre-Youth Summit for young people and on the August, 22-23, 2018, the First Lady would hold a joint programme with the Africa Girls Summit at the Accra International Conference Centre.
She said First Ladies from all African countries would be attending and a total of 600 girls drawn from all the regions of Ghana are expected to participate to bring the needed development to Africa.

The Minister said Africa was rising and therefore the need for a succession plan for young girls to ensure that child marriage was curbed by the year 2030.
She, therefore, urged all the various groups that handled girls’ issues to come to the Ministry and register for further details and participation.

She said this shows the commitment of the First Lady and the President to move the gender issue of equality and equity to the next level so that by 2030, ending child marriage could be assured and all girls have a bright future.

Ms Nena Thundu, the AU Coordinator of Campaign to End Child Marriage in Africa and Policy Officer, on behalf of the AU Commission expressed gratitude to Ghana for accepting to host the conference, adding that, this was a great opportunity for them.

She said this was a follow-up to the First Ladies summit held in Zambia in 2015 since it was launched in 2014.
She said during the pre-youth summit, the young ones would be given the opportunity to bring their ideas from different perspective such as education for boys and girls, sexual reproductive health, ending child marriage, the role of the youth in community, among others and the way forward.

Ms Thundu said on the August, 22 -23, the young people would join the African First Ladies and other key stakeholders in discussing a number of the key issues and they would draft an outcome statement.
The outcome statement she said would include all issues discussed and presented.

She again expressed appreciation to the government of Ghana for the commitment shown in ending child marriage.
There has been a growing interest on child marriage in Ghana from all actors, including civil society organisations, the government and the donors. Recent data shows that the practice is slowly decreasing.

However, one in five young women today are married before 18, compared to one in three in the early 1990s.
The event would be organised in collaboration with traditional leaders, organisations, Ministry of Chieftaincy and Religious Affairs, OFLA, Ghana Tourism Authority, UNICEF, Office of the First Lady, Department of Gender, UNFPA, and the National Security.

Accountability would improve when MMDCEs are elected – Dr Osae