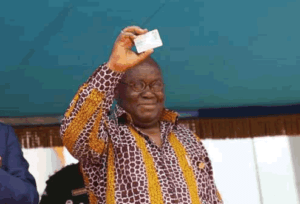 President Nana Addo Dankwa on Saturday called on the Minority in Parliament to stop politicizing the national identity registration process and to support the initiative to aid Ghana’s transformation agenda and development.

He said it is unfortunate that leaders of the Minority in Parliament were deliberately sabotaging the process, which the side had previously enthusiastically supported and sanctioned the provisions in National Identification Register Amendment Bill.

He said they have now turned around to thwart the progress of the exercise to improve the nation’s security and fast-track its development.

“I had hoped that the exercise to provide all citizens with a national identity card would receive the enthusiastic support from all of us as the project finally gets off the ground, after years of wilful stagnation and neglect”, President Akufo-Addo said at the 14th graduation ceremony of the Ashesi University at Brekusu near Accra.

He said the standpoint of the minority that the possession of a voter’s identity card qualified one to be issued with a national identity card was not a tenable argument, considering the fact that many non-Ghanaians were in possession of voter’s cards which they obtained by offering the NHIS cards as proof of identity.

“I believe it is also generally accepted that the terms of our National Health Insurance Scheme makes it attractive to our neighbours, and many have signed on to benefit from the free healthcare provided under the Scheme. This is why the Supreme Court handed down a ruling that the NHIS card should not be used as a form of identification to register for a voter’s ID card.

The Minority had during the debate on the National Identification Register Amendment Bill, accepted without dissent the report of Parliament’s Select Committee on Constitutional, Legal and Parliamentary Affairs, which did away with the use of voters’ identity cards, drivers’ license and baptismal certificates as proof of citizenship and maintained the use of birth certificates and passports for the acquisition of the national identity cards.

“Unfortunately, we seem to have become embroiled, once again, in another of those full-scale manufactured storms deliberately engineered to slow down progress in everything we try to do.

“If we, as a people, have been conducting our affairs properly throughout the years, there should not be any argument in determining who is a Ghanaian. But we have not,” he said.

The President was unequivocal in stating that “it should not be in anybody’s interest that we bastardize the identity of a Ghanaian. It should not be in the long-term interest of anybody that we enlist as Ghanaians, people whose loyalty to our nation is limited to access to our free healthcare system.”

“I certainly have no interest, and no intention to prevent genuine citizens from being issued with identity cards. But, my oath of office is unequivocal that I owe it to the nation to uphold the law and protect our institutions from being undermined.

“I do not think that there are more credible, basic, documentary requirements for establishing nationality or citizenship than a birth certificate or a passport. An appropriate, acceptable mechanism has been provided in the law to verify the claims of those who have neither.

The President said, “I maintain that it should be the greatest honour to be able to say I am a Ghanaian, and we should have no difficulty in identifying a Ghanaian not only as a legal entity, but also through his or her behavior”.

“There is a legal definition of who is a Ghanaian, and I pray that we abandon giving politics a bad name, and support this exercise to proceed rapidly to a successful end.
“The language of de-nationalisation or threats of civil war are, to say the least, extremely unfortunate.
They can be fittingly described as base forms of self-serving demagoguery. I am confident that the good sense of the Ghanaian people and the vigilance of the law enforcement agencies will, together, be sufficient to defeat any ill-conceived, destructive adventure for achieving narrow, parochial, partisan ends.

“The lust for power should not cloud one’s sense of judgement. To call yourself a Ghanaian means you must be a responsible citizen,” the President said, and called on all Ghanaians to support the registration exercise.