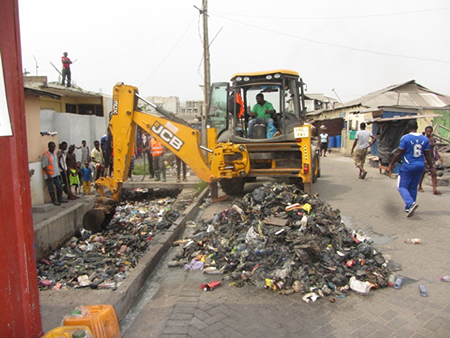 The Accra Metropolitan Assembly (AMA) has assured the public that the Assembly and the Ministry of Sanitation and Water Resources are working around the clock to solve the waste collection and disposal in the Greater Accra Region.

The Assembly as a matter of urgency called on the management of the Kpone Landfill Site to resume its 24-hour operation as the Ministry works on additional landfill sites to serve the region.

The assurance was given in a statement signed by Mr Gilbert Nii Ankrah, the Head of the Public Affair Department of the AMA and copied to the Ghana News Agency on Monday.

It said the Nsumia Waste Disposal Site, located in the Nsawam-Adoagyiri Municipality off the Accra Nsawam Highway has been closed down whilst the Kpone Landfill Site was also not in full operation since Saturday 14 April, 2018.

The statement said in view of this, all refuse trucks directed to the Kpone disposal site were experiencing abnormal long queues and this has compounded the already short eight-hour operational period.

It said for these reasons, the AMA and trucks of private service refuse collection trucks were delayed at the landfill sites, hence the backlog of wastes being spotted at various locations across the city.